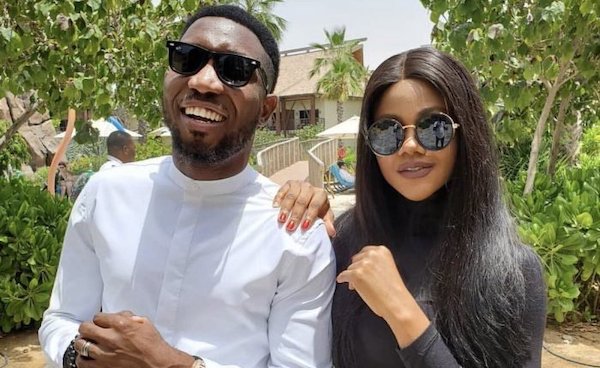 Popular Musician, Timi Dakolo, has cried out over an alleged attempt by security operatives to abduct his wife at their house in Lagos, stating that the lives of his wife and children are now under threat.

Timi and his wife, Busola, lamented that they have been unable to work and his children have also been unable to go out freely for fear of their safety.

Speaking at a press conference held on Sunday, Timi and Busola gave details on the events that have trailed the rape allegation levelled against Pastor Biodun Fatyinbo, Senior Pastor of the Commonwealth of Zion Assembly (COZA) Worldwide.

Dakolo, who said the police have refused to invite Pastor Fatoyinbo, who allegedly raped his wife, Busola, 20 years ago, wondered why the police would storm his home in Gestapo style to invite him and his wife to Abuja from Lagos State while Fatoyinbo who was in Abuja had never been invited.

He stated that a petition had been filed against Fatoyinbo on June 27 in Lagos, before the release of Busola’s interview on Y!TV, on June 28, where she gave details of the rape allegations.

Dakolo, narrating how his wife was nearly abducted, said: “Yesterday, Saturday July 20th, 2019 in the early afternoon, I had notice a tinted bus parked near our home. I did not know that at the same time, my wife was being followed by a car into the estate.

“She noticed the car and out of fear, parked the car to be sure that her fear was not real – but it was. Every time she parked, the car parked and she decided that she should rush home quickly, since she was near the house.

“When she got onto the street, she noticed the same bus I had seen earlier and saw that someone from the car that was following her signaled to the bus, at which point 3 ARMED POLICEMEN wearing SARS vests surrounded her car, demanding for her to come down. The door of the bus was open and she saw that the bus was full of armed policemen.

“She immediately called her lawyer and when the policemen heard that she was talking to a legal representative, they stepped back and claimed that they were only there to drop a letter; they had not said this before nor shown her the letter.

“Before then, they were demanding that I step outside the house. They had also demanded that my wife step out of the car.

“The letters the policemen said they had when they heard us speaking to the lawyer were then presented. We noted that the letters are dated Thursday, July 18th. Why were they being delivered on a Saturday afternoon by a bus full of armed policemen and a car trailing my wife into the estate? Why did they not deliver the letter and leave when neither myself nor my wife were present? And why did they only step back when they became aware that lawyers were involved? These questions have been on my mind. I do not have answers for them.

“The letters made no reference to any case or matter and it states that we are being investigated for a case of falsehood and mischief – two offenses that are not known in law.

“In the police’s press release yesterday, they claim a Police Invitation Letter is “… a polite in-vestigative tool used in eliciting information voluntarily from parties to aid in police investigation.” If they were just delivering a letter, the manner in which they intentionally tried to instill fear, intimidate us with guns and insist on our coming to their bus – was neither polite nor trustworthy.

“How is the Nigeria Police pursuing justice when Pastor Biodun Fatoyinbo, who is the accused in my wife’s matter, is not being treated in this manner but the authorities I expect to pursue justice are attempting to intimidate myself and my wife?

“My children were at home!!!! They could also have been in their mother’s car!!!

“We have never threatened anyone in our lives. Rather, we are now the ones who feel threatened. That is why we have Falana&Falana Chambers representing us and they have reported this matter to the police.

“We received the information from our lawyers, Falana&Falana Chambers, this morning that both our petition and the petition of Mr Biodun Fatoyinbo will be moved to Lagos. We ac-knowledge the effort of the Nigeria Police to ensure that our confidence in their impartiality, professionalism & good sense in this case is not shaken.”

Make money from your wastes, don’t dump them in canals, LAWMA tells Lagosians