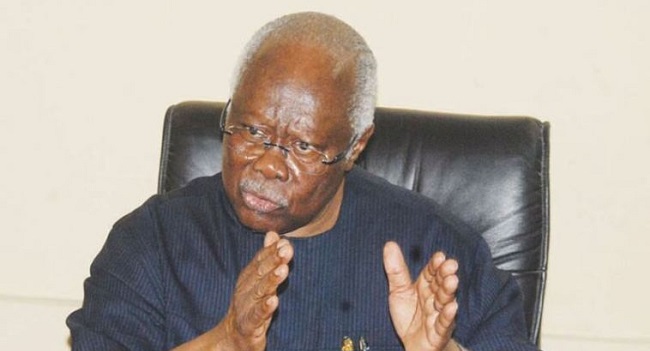 The discourse over whether the current National Chairman of the Peoples Democratic Party (PDP) Iyorchia Ayu, should resign continues to divide its stakeholders with Bode George wading into the situation.

Bode George, who is a former national vice-chairman in the South-West zone of the party, also joined the growing agitation for Ayu’s resignation while clamouring for a South-West PDP National Chairmanship.

The elder statesman made his position known, on Thursday, during an interview on AriseTV monitored by Ripples Nigeria.

George further reiterated the need for inclusivity in order to eschew divisive politics within the party ahead of the 2023 elections.

He noted, “The most important thing is that there is a process we called inclusivity and right now, the South generally is out of the political equation within the PDP.

“My position is that if we are deviating from the norm, some of us must be able to steady the ship. You want me to canvass votes in the region but the top six positions have been evenly distributed amongst the zones.

“Ayu, himself, knows that once the Presidency comes from his zone, he must resign in the spirit of inclusivity. How do we talk to the people with the current happenings within the party? The campaign is not even guaranteed due to the current insecurity and the PDP don’t need a divided house, lest a defeat in 2023.

“If we look at it rationally, the PDP chairmanship must come from the SW. Of all the three zones in the South, it is the SW that has not gotten the position of the national chairmanship.”

He further revealed that he was not seeking to become either the next PDP National Chairman or any political position.

“I have played my part and not looking for any political appointments. By the end of the 2023 elections, I will bow out of active politics,” George clarified.