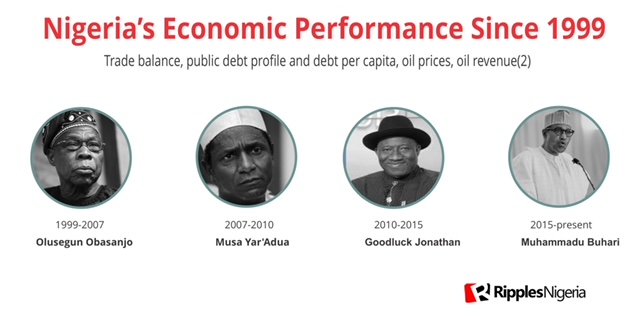 This is the concluding part of comparison of how the Nigerian economy has performed under the administration of Olusegun Obasanjo, Umaru Musa Yar’Adua, Goodluck Ebele Jonathan and Muhammadu Buhari

In this week’s report, public debt profile and debt per capita, and also oil prices under each president will be analyzed.

Nigeria’s rising debt profile has been a major issue in recent years. Despite securing debt relief during the Olusegun Obasanjo-led administration, successive governments have continued on a borrowing spree.

Recently the Debt Management Office got many Nigerians worried as it announced that the debt could hit N77 trillion.

This is a measure of how much debt a government has per citizen head.

Here’s a breakdown of how much debt burden each president left for citizens.

One major source of debate on the economic performance of President Muhammadu Buhari administration is that the previous administration enjoyed oil boom.

Being the key income earner of foreign exchange and revenue, it is easy to understand why it is always referred to when discussing performance of presidents.

Buhari while on a one-day visit to Imo State in September 2022 disclosed that Nigeria earned an average of $100 per barrel from 1999 to 2015, but past leaders could not improve the country’s infrastructure.

Checks, however, have revealed this not to be true. Here is a breakdown of how much oil price averaged under each president.

In 2015 before President Muhammadu Buhari came on board, crude oil prices hovered around $62 to $66 per barrel.

RipplesMetrics: How exchange rates impacted most imported items in 2022