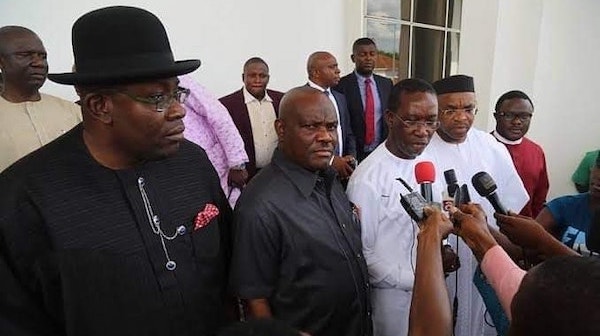 Governors of the 36 states in the country heard on Tuesday that Rivers and Akwa Ibom states have the highest number of HIV/AIDS prevalence rate in Nigeria as at December 31, 2018.

This information was revealed by the delegation of the United States Agency for International Development (USAID), Centre for Disease Control (CDC) in Nigeria and Department of Defense, that visited the Nigeria Governors’ Forum (NGF) to seek the governors’ approval for the abolition of user fees by all HIV positive persons in the country.

The delegation was led to the NGF by the USAID Country Director, Steve Haykin.

The three organizations are seeking to curb the spread of HIV/AIDS in Nigeria.

A statement issued by the NGF’s Head of Media and Public Affairs, Abdulrazaque Barkindo, said the governors have promised that testing and combination therapy would cost nothing.

According to him, the group which is currently working on the Presidents Emergency Plan for AIDS Relief (PEPFAR) project, is also seeking political relevance and visibility in the area of HIV/AIDS prevention so that Rapid Test Kits would be available in a more sustainable manner for the epidemic to reasonably reduce in Nigeria.

The statement read: “If the 36 governors finally sit and agree on the request, testing and the famed combination therapy which has kept people to continue living with HIV/AIDS will be absolutely free.

“The strategic approach to diminishing the spread of the epidemic in the country is to identify and bridge the critical gaps so that there are more people receiving treatment than the ones that are dying, according to PEPFAR Coordinator, Mark Gambrone, who spoke on behalf of the group. On the team were Debra Conner, CDC Deputy Director, Solomon Odafe also of CDC and Margaret Shelleng, PEPFAR Multilateral Advisor among others.

“Using a recent demographic which they said was achieved in a record time of six months, the officials also disclosed, with cautious introspection that, while the successes recorded in the worst affected areas of the country like Benue State do not mean that the scourge has vanished, there is great room for improvement on a national scale if the governors all key into the project.

“According to the demographics, by the end of 2018 Rivers and Akwa Ibom States ranked tops among affected areas followed by Delta and Lagos in no particular order, but also expressed optimism that a large number of states in the country are experiencing a shrinking epidemic, when it comes to HIV because of the hordes of people who are under medication.

“What the team wants governors to do is to facilitate the supply of the Rapid Test Kits so as to accommodate more people who receive treatment, as experience has shown that more than 80 percent of patients are usually domiciled in barely 20 percent of the states. This according to the team has made it easy for them to work towards wiping out the spread of the scourge and by implication could also be even easier for governors, in whatever state, to meet their needs easily.

“Since its inception in Nigeria in 2004, PEPFAR has disbursed more than $5.1 billion to support the Nigeria HIV/AIDS response. Some measures of success include about 772,000 men, women and children currently on HIV treatment, in 2017 alone.

“Regarding its records in Nigeria, PEPFAR website claimed that approximately 7.7 million people have received HIV counseling and testing services and more than 1.6 million pregnant women received HIV testing and counseling toward prevention of mother-to-child transmission of HIV. More than 1.1 million orphans and vulnerable children received care and support services.”

Wristwatches worth over N20m recovered from Nigerian Instagram celebrity, Mompha