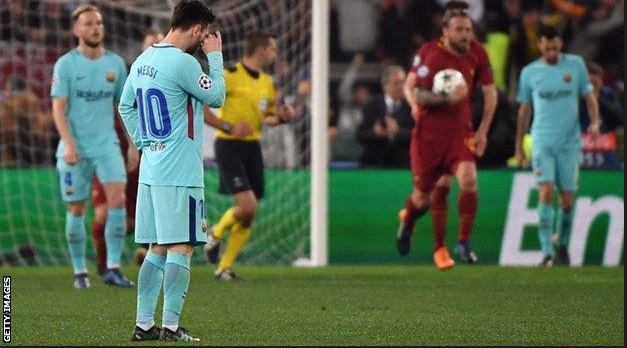 Serie A giants, AS Roma pulled off an incredible comback as they overturned a 4-1 deficit against La Liga leaders, Barcelona, to reach the UEFA Champions League semifinals on Tuesday night.

Leading three goals up from the first leg at Camp Nou, Barca were the favourites to advance but Roma’s brilliant showing at home earned them a vital 3-0 victory.

Edin Dzeko opened the scoring on six minutes to give Roma hope, before Daniele de Rossi added a second via a penalty in the 58 minute.

Barca pressed on to pull back one goal but failed to find the back of the net as they crash out of the continental competition, with La Liga and the Copa del Rey their only possible titles this season.

In England, Liverpool completed the job against Manchester City, as they picked up another win at the Etihad Stadium to seal a spot in the last four of the Champions League.

Leading 3-0 form the first leg of the tie at Anfield, the Reds had their lead cut down when Gabriel Jesus scored from Raheem sterling pass in the box just 2 minutes into the game.

Jurgen Klopp side made it 4-1 on aggregate 10 minutes into the second half with a clean Mohamed Salah strike, before Roberto Firmino scored the winner for the night to end the game 5-1 on aggregate.

Liverpool are reaching their first Champions League semifinal in 10 years, and the victory at Etihad is their third win over City this season.

Bayern will host Sevilla while Real Madrid will welcome Juventus in the other quarterfinal matches on Wednesday.

#GC2018: D’Tigers lose to Scotland, miss out on semifinal spot