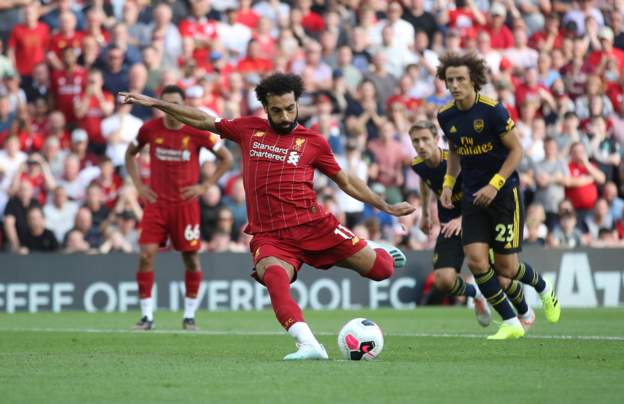 Mohamed Salah was twice on target for Liverpool in the Reds’ 3-1 thrashing of Arsenal in the Premier League on Saturday.

The reigning African Player of the Year converted a penalty in the 49th minute to double the lead for his side after Joel Matip had put them ahead in the first half.

The penalty was awarded following a moment of madness when David Luiz needlessly dragged Salah back in the area.

The Egyptian added Liverpool’s third with a stunning solo goal in the 58th minute to hand Arsenal yet another heavy defeat at Anfield.

However, with five minutes left on the clock, Lucas Torreira scored a consolation for Arsenal, pouncing on a loose ball inside the area before smashing a low shot into the bottom corner.

Having won their previous two matches and denying the Gunners on Saturday, Liverpool are the only team yet to lose a point this season in the Premier League.

The victory was also Liverpool’s 12th successive Premier League victory, equalling their best sequence in the top flight under Kenny Dalglish between April and October 1990.