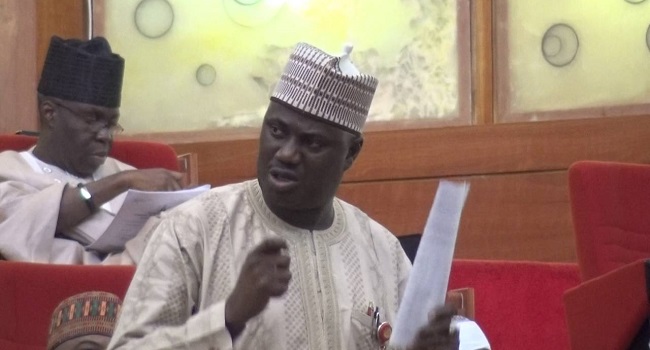 Spokesman for the “Ahmed Lawan for Senate President Group of Senators” and chairman, Senate Committee on Media and Public Affairs, Sabi Abdullahi, has said that the Majority Leader, Senator Lawan, is the choice of All Progressives Congress (APC) lawmakers to become the 9th Senate President.

Apparently describing as false, claims by former Senate Majority Leader, Ali Ndume, that the adoption of Lawan to be the next Senate President was that of the APC national chairman, Adams Oshiomhole, Abdullahi said, “it is not good for somebody to peddle lies.”

According to him, APC senators-elect were carried along in the adoption of Lawan for the position. He said the claim that senators-elect were surprised when Oshiomhole declared it at a meeting they had with President Muhammadu Buhari on Monday in Abuja was not true.

Ndume, who is interested in the position, had claimed that the announcement of the adoption of Lawan by Oshiomhole, came to senators-elect as a shock.

But Abdullahi said, “Immediately he (Oshiomhole) said that, there was instantaneous and spontaneous applause by senators who were there. For somebody to say there was surprise and shock following the announcement, he was economical with the truth. There was no shock, rather there was relief.”

Noting that APC has learnt its lesson from the mistake of 2015 when Dr. Bukola Saraki became the Senate President against the directive of the party, he said, “If the party has promised Nigerians good governance, it is only fair and proper for the party to play some role to deliver that good governance. For me, we have learnt our lessons from whatever happened in 2015.

“Even when I’m walking on the street, people say please you people should make sure you learn from your past mistakes. As far as I’m concerned, we have unity of purpose.

“We the senators-elect, we have made a choice. We have the right to say this is who we want. Our choice is Ahmed Lawan. Do you expect that Mr. President and the party should abdicate their responsibility? This is what they accused us of in 2015. Now they have spoken, why are you complaining?”

He said Ndume, and any other APC senator interested in the position should have as genuine party loyalists drop their ambition and toe the party line as soon as Oshiomhole announced Ahmed as the party’s choice.