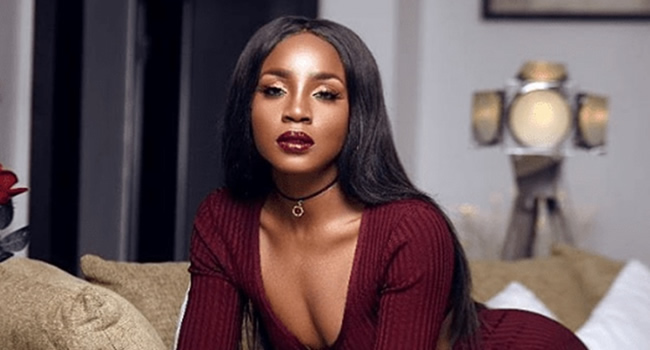 Nigerian recording artiste, Seyi Shay has been called out for making a mockery of a Nigerian idol contestant.

According to Seyi Shay, the 17-year-old contestant identified as Ayo Torrus can never succeed as a professional artiste. She mentioned this at the ongoing Nigerian Idol audition, which aired on Sunday, March 28.

She was unimpressed by his performance and told him he will do well as a songwriter, not a singer because he’s a ‘terrible’ performer.

”Somebody lied to you.

Somebody told you to come here and audition.

You should go back and tell them that they aren’t your friend because that was not a good audition.

You have a sweet-talking voice and it comes out in your singing voice, but your performance is terrible.

For songwriting, hit me up, we could talk, but that singing is not going to work. Sorry Darling”she said

The youngster, Ayo Torrus also reacted.
Torrus quoted the tweet showing the video and wrote;
“This broke me Emotionally and Psychologically, but God got me!!!”

Here is the video.

Imagine Seyi Shay telling a 17 year old with good voice, who has passion for singing that “YOU ARE NEVER GOING TO MAKE MONEY BEING A SINGER”. Cos you’re God abi?pic.twitter.com/QZsBVNWutG

The music star’s comments didn’t sit well with a lot of Nigerians as she was dragged on Twitter for being aggressive towards the teenager.

Here are some of the reactions by Nigerians on Twitter over Seyi Shay’s comments.

No cap 🧢 This seyi shay words are what most Twitter influencers say to a lot upcoming artist every single day in this platform,now they are all forming outrage for likes and retweet. Twitter for hypocrisy at it again. pic.twitter.com/lQVQl12Ogx

Seyi Shay should not have said that the boy would never make it in music. She should have encouraged him to continue working on his vocal training and return for another audition.

i lowkey want to audition for the Nigerian idols, and avenge that boy from yesterday, seyi shay Live diss track 😂😭

Ayra Starr's Away is bigger than all Seyi Shay's songs combined👏. pic.twitter.com/CkVKQQGA4w

Seyi Shay has earned her money.She is obviously the designated antagonist & she's done more marketing for the show than anything they've done.I feel for the boy but my view about these things stay same,harsh criticism is part of life & we all give & get it sometimes.He'll be fine

If you are one of those people who always talk people down or make people feel less of themselves, then you have no right to judge Seyi Shay!

Seyi Shay should have tried the sandwich approach

That's how to give feedback

Eg: nice voice, I think your performance could be better if trained, once again, nice voice.

How you say a thing matters also.

Definitive. The god-complex. The guy clearly stated that he's nervous.

Some people are terrible.

Related Topics:Seyi Shay
Up Next

Moghalu to host a summit for youths on good governance