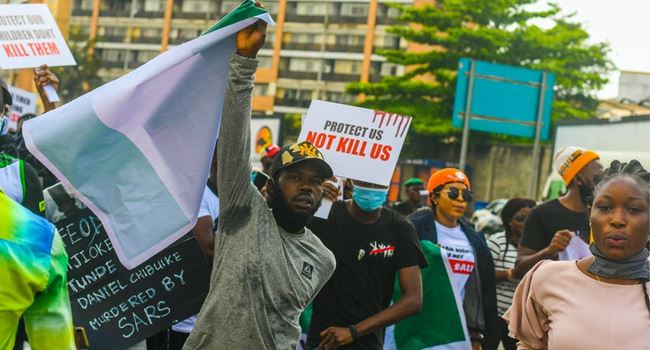 The agitations of ‘online protesters’ via social media have been similar to those of actual #EndSARS, #EndSWAT protesters who are on the streets across the country.

Nigeria Twitter has continued to trend numerous hashtags, including #SWATmustEnd, #EndInsecurity, and calling out the nation’s leaders while doubling up efforts to end police brutality in the country.

The hashtag which trended top of the table for most of Wednesday, reflected the people’s rejection of the replacement of the recently-disbanded Special Anti-Robbery Squad (SARS) of the Nigeria Police.

#EndSARS protesters are of the opinion that SWAT (Special Weapon and Tactics) is only SARS that is camouflaged in a new name, and must be dissolved as well.

These people lie too much #aisha #Sega #EndSWAT #pamilerin

We don know sey na our generation go stop the nonsense in Nigeria. Even animals for abroad enjoy rights pass us. Bullshit! #SWATMUSTEND

@Arahmeedhey Like seriously, I so much like this kind of surgery, cause, this exactly what they need, if their thinking faculty is not well functioning again ?

Dem neva see anything, we and dem, na day break every burst ni?#EndSWAT

The hashtag, suggesting the birth of new political party by Nigerian youths, had conversations around the #EndSARS movement having no particular leader, and that protesters had approved no one as their representatives for negotiations with the government.

This had caused a little rift among youths in the early hours of the day, but both Dipo and Segalink have since called for Unity and togetherness in the #EndSARS cause.

This is true…. NO LEADER, not even Ogbeni Dipo, Sega link, Pamilerin, FK Abudu or anybody… We appreciate all they have dont in past years but let them not compromise this struggle. #YouthDemocraticParty #SWATMUSTENDNOW #SARSMUSTENDNOW #EndSWAT

Thank God for technology. Do live streams… Go on tv and show workings! Which one is leader? There are ways to have direct access to the people in 2020! C'est fini.

I forgive them all. Let’s move on. I will never forsake the cause regardless of the coordinated attacks. I was born for this. If you must protest do it with your chest. No harm shall come to you. We will make sure if this. Let’s keep Govt accountable & shun distractions. ??

Oyo State governor, Seyi Makinde made a donation of the sum of 100million Naira for the repair of the vandalized palace of the Soun of Ogbomoso. The announcement caused “100M” to hit the trends table.

Nigerians queried the governor’s gesture, as some expressed their disappointment in what they believed was a case of misplaced priorities.

People who lost lives got 1m

I have no words

They really shot and killed all the guys that entered the palace in oyo and seyi makinde is giving the oba 100M??? ???

It's the craziest realizations I've ever made. How can a senator earn hardship allowance and newspaper allowance in millions?????? Yet there's no money for police or teachers???

Until these people started earning salary like every other civil servant, Nigeria is going no where

#EndSARS protesters in Abuja were greeted with shock as a group of armed ProSARS supporters disrupted their peaceful protest early on Wednesday.

Phrases like “Fulani”, “Hausa” and “Abuja” littered the trends table as protesters drew the attention of Nigerians to the heat brewing in the nation’s capital.

How can we be sharing a country with these kind of people?

So the Government is now sending thugs to attack us… @MBuhari you have failed this country.

Where are the so called police that are assigned to protect lives?? Oh will you say they went for psychological test and bla!!!

All we want is #endswatnow #EndSARS

They’re Northerns, the government never stops using them for their evil act.

Reason they want to keep the educational system in shambles. The people’s ignorance is their strength.

Just say PRO SARS nobody care where they come from in as much we don't want violence if they become threats they should be put in their place they can't outnumbered the good guys.

I've always said this, nobody has a monopoly over violence. Kudos to fellow Nigerian youths on ground fighting for all us, with one agenda, which is a better Nigeria.

We would win this fight, its a gradual process.#EndSWAT

Nigerians trended the hashtag alongside #EndSWAT to commiserate with the Democratic Republic of Congo over activities of armed rebel groups in the fellow African country.

Everybody wants to make money to feel important in the society. We have been conditioned into poverty that we don't reason beyond making money. We don't plan for future. We hate ourselves so much. This is why it's very easy for our enemies to keep bleeding Afrika.#CongoIsBleeding