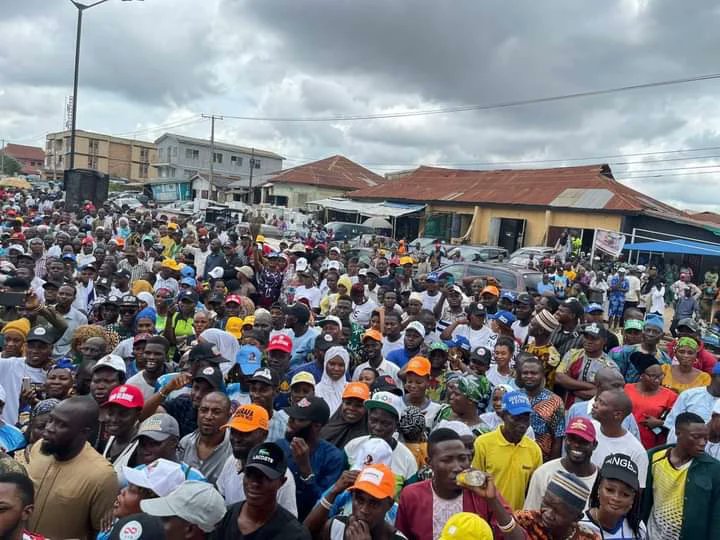 The supporters of the All Progressives Congress (APC) presidential candidate, Asiwaju Bola Ahmed Tinubu’s have staged a walk in solidarity for Tinubu.

The supporters were seen taunting the supporters of Labour Party (Obidients) and the PDP (Atikulated) at a massive rally held in Ibadan, Oyo state capital.

After the Asiwaju walk, I had to step down 😀 pic.twitter.com/8Vrwstaf5g

We no even announce rally ooo.
Just a flexing youth walk.

Asiwaju is the man to beat

Ibandan Youth Walk For Asiwaju Bola Tinubu, This Is Not On Social Media But Happening Live In Oyo State (A PDP State)

ME: Dear #ObiDIOTS, they didn't tag this one (yeye 2m walk like una Scanty walk) but see people, only Youths oo.

ASIWAJU campaign walk in 2 different states simultaneously on a weekday, it’s the audacity for me. Small walk ASIWAJU is trending, jungle is maturing 😂 pic.twitter.com/MfxpHLQKI3

Hon Oloye @akinalabi and other Youths in Ibadan troops out for Asiwaju this morning tagged "Youth walk for Tinubu" pic.twitter.com/VTA4W49pLM

You disobedient children started this una yeye walk to deceive your principal but BAT will start giving you double henceforth Knuckle Up!!! pic.twitter.com/psegLADqgw

Nigerians have shown appreciation to the gesture of President Muhammadu Buhari to honor the Nigerian representatives at Commonwealth Games, and World Athletics Championships.

Ripples Nigeria gathered that the president rewarded the athletes with national honours, and N200 million.

Tobi Amusan also received the Officer of the Order of the Niger (OON) Honour from President Buhari.

“You all Team Nigeria made that possible. You brought glory and honour to our country. And today, on behalf of the nation- I say, THANK YOU!” the president said.

Tobi Amusan has been conferred with a National Honour in Abuja, with the 100m Hurdles World Champion receiving: Officer of the Order of the Niger (OON) Honor from the Nigerian president, Muhammadu Buhari. Thoroughly deserving 👏👏, she has been a great ambassador for 🇳🇬🇳🇬 pic.twitter.com/Qvqj0wDjfR

Tobi Amusan, the Officer of the Order of the Niger (OON) honor confirmed.
Congratulations, Tobi. You be big fish! pic.twitter.com/FFejNQa23n

Nigerian Tobi Amusan has been awarded the Order of the Niger (OON), one of the country's highest honours. pic.twitter.com/TgXjIk4IXt

Congratulation Tobi Amusan on your conferment with the Officer of the Oder of the Niger (OON) by President Buhari.
Wish you more wins. pic.twitter.com/sggaTvbxxO