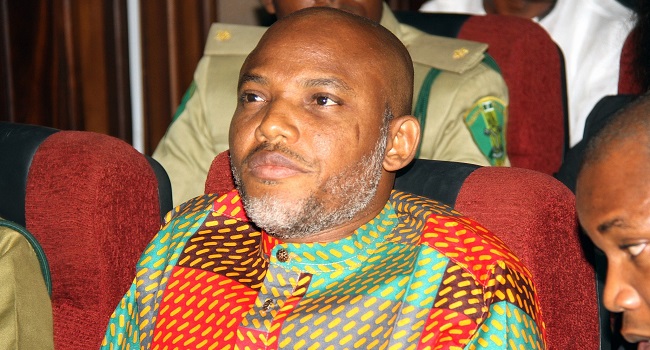 The leader of Indigenous People of Biafra (IPOB) Nnamdi Kanu has alleged that governors of the Southeast and the leadership of Ohaneze Indigbo masterminded the attack on his residence in Umuahia, Abia State by soldiers.

Kanu, who also ordered members of IPOB to disrupt any meeting of the Ohanaze in Igbo land, said the governors and Ohaneze made the Federal Government to abandon the negotiation it was having with him.

The IPOB leader stated this in a broadcast on Biafra Radio, according to a statement by IPOB spokesman, Emma Powerful, adding that he was granted conditional bail in order to cage him and his group.

Kanu, who was facing treasonable charges before a Federal High Court, Abuja, was granted bail in April, 2017. He however jumped bail and went into hiding after soldiers invaded his home only to resurface in Israel.

The IPOB leader, who also insisted on a referendum in the broadcast, said: “Their problem is Nnamdi Kanu and the solution to their problem is referendum. They gave me conditional bail to cage me and IPOB but I refused.

“We are not going to vote because we’re too intelligent for that nonsense. I am not interested in the politics of Biafrans, all I want for my people is freedom.”

According to him, the Igbo have been voting for years, adding that “absolutely nothing” has come out of it.

“It is either Biafra or we die trying to get Biafra.

“Anywhere or anytime Ohanaeze Ndigbo gathers for anything in Biafra land, it should be disrupted. Being an IPOB (member) is a very unique privilege.

“I don’t know if UK is among the attack on me. I will go to London first and find out. I am not IPOB. I do the will of IPOB. The people is IPOB and IPOB is the people. They invited and asked me to drop my quest for Biafra and I refused. I told them, all we want is Biafra and there is no going back. The South East governors and politicians then obliged Aso Rock to attack and kill me.”