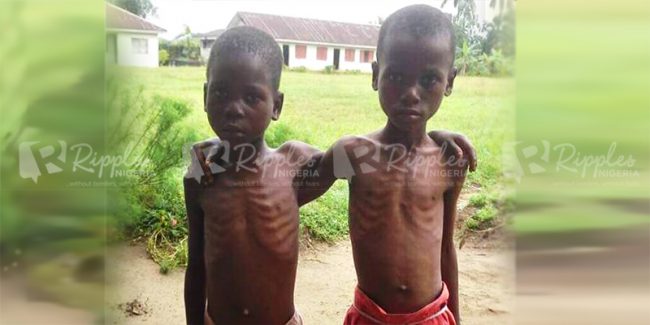 On paper, Muhammad Zayyanu is seven years old. The quiet boy who looks shorter for his age could not recollect when breakfast was part of his daily meal. It is difficult for a child whose main meal for the day is usually after sunset.

He counts himself lucky to eat breakfast except on festive religious occasions when people share food with neighbours. His mother, Hajira Zayyanu, says skipping meals is a routine part of their lives since bandits attacked their village in Jakkuka, Zamfara State, which left dozens of people killed in 2016.

Hajira escaped death by the whisker when bandits shot her eldest son and husband before her eyes. She ran off into the forest with her remaining children while the insurgents were looting food barns in the village.

“We no longer have the luxury of eating three times a day. It is by God’s grace my children eat breakfast or lunch. Our guaranteed meal for the day is mainly in the evenings,” she said.

The Internally Displaced Persons (IDP) camp in Anka, Zamfara State, where Hajara currently lives, is host to over 10,000 displaced people like herself. Since 2016, Amnesty International says bandits have killed over 5,000 people and displaced over 50,000 civilians from their homes in Zamfara towns and villages.

Hajira and her three children were getting regular food supplies when they arrived at the camp, but it was short-lived. Residents in the camp who spoke to this journalist say government agencies and NGOs prefer to focus their attention on new arrivals because the needs of the locals are much.

“We had land where we farmed rice and guinea corn at Jakkuka, but since we came here, whatever we see is what we eat. We don’t have farms here but depend on goodwill from Nigerians and donor organisations who bring food to the camp, mostly my children eat once a day,” Hajira said.

The 32-year-old mother of four resorted to begging for alms as a source of livelihood and barely makes N2,000 weekly. Her 17-year-old daughter got married in the camp to ease her financial burden, while a good samaritan enrolled two of her children in a local school under a tree.

Hajira does not possess any particular skill, apart from working on a farm or rearing livestock within the house. She seems out of her depth in the IDP camp at Anka, without land or animals to raise.

“I am the breadwinner of the family, taking care of these children (pointing to three of her kids) from the alms I get every day. It’s not easy when you have many mouths to feed; skipping some meals is normal, but I try to ensure they don’t sleep on an empty stomach,” she said.

Muhammed joins 13.1 million children in Nigeria who are stunted from poor diet practices. His mother prioritises his dinner to breakfast; as a child in an IDP camp, the odds are against him as he can barely get access to good food needed for optimal growth.

Four out of five IDP’s have inadequate food consumption compared to the 29 per cent of the general population, according to a 2021 survey by the World Food Programme (WFP) National Bureau of Statistics (NBS) and the Federal Ministry of Agriculture and Rural Development (FMARD).

The survey conducted in IDP camps in Zamfara, Sokoto and Katsina States also revealed that children between the ages of six to 39 months were ranked 2.5 per cent on the Global Acute Malnutrition scale, when compared to the critical emergency threshold set by the World Health Organisation (WHO) at 15 per cent.

“A visit to these IDP camps shows you that the residents live in poor conditions, and the Federal Government has not taken the plight of displaced people as a priority because the reasons some of these camps exist is because of the donor organisations,” he said.

The 2020 Global Hunger Index, GHI, ranked Nigeria at 98 among 107 countries, ahead of countries like Afghanistan, Lesotho, Sierra Leone and Liberia.

Nigeria’s low ranking was described as“severe” and blamed on malnutrition. Over 12 per cent of its population is undernourished due to inadequate food lacking in quantity and quality.

According to the GHI report, over 6 per cent of children below the age of five years in Nigeria are wasted, which is low weight for their age from acute malnutrition, and 36 per cent are stunted.

Oyejide Adesanjo, a nutritionist, says institutionalising a homegrown feeding programme for children in these camps would address the underlying problems of malnutrition.

“The government needs to set a national policy to address the concerns of malnutrition in children in the country, especially in schools. This should be done by scaling up its intervention schemes at children in the rural areas through home gardening and an adequate supply of nutritional meals to their schools.

“It should move past political grand-standing where a politician in front of the camera eats with students, but the main issue should be the quantity and the quality of the food the students are served,” he said.

In 2015, Nigeria adopted a five-year plan, called the National Strategic Plan of Action on Nutrition (NSPAN) to combat malnutrition. The entire project was expected to cost N328 billion to implement.

For the duration of the programme, Nigeria’s investment in nutrition was a far cry from meeting its target. The Federal Government-approved budgetary releases for Ready To Use Therapeutic Food (RTUF) for malnourished children are as follows, N366 million in 2016, N1.2 billion in 2017, N400 million in 2018 and N61 million in 2019.

In 2020, N800 million earlier slated for RUTF was withdrawn from the budget; records show that Nigeria has spent a total of N2.2 billion on RUTF, which is 0.5 per cent of the total funding needed to implement the project.

Ironically, between 2011 to 2018, malnutrition among children under age five increased as child wasting grew from 24 to 31 per cent in 2018, while stunting rose from 34 to 43 per cent, based on data from the 2018 Multiple Indicator Clusters Survey (MICS).

The cost of treating one child suffering from malnutrition under the Community Management for Acute Malnutrition (CMAM) a programme initiated by the United Nations International Emergency Fund, UNICEF, costs $160, which is N65,894 at the official rate of N411 to $1.

At 14 months old, Aisha does not look much well-fed; neither does she look too sickly like some other infants at the camp. She still takes breastmilk, though her mother Faizah Abdul says breastfeeding her daughter is tasking because she doesn’t eat a proper diet.

“Health officials taught us in the camp that we could breastfeed our children after one year, that’s what I’ve been doing, but it’s not been easy for me. The sachet food (RUTF) that was initially given to my daughter has stopped coming. If it were here, I would have stopped breastfeeding,” she said.

In January, Nigeria’s Vice President, Yemi Osinbanjo, pitched a five-year nutrition action plan from 2021 to 2025 to guide intervention programmes against hunger and malnutrition in the country.

The plan is to reduce the number of people who suffer malnutrition by 50 per cent, increase the rate of exclusive breastfeeding by 65 per cent and ensure the stunting rate among under-five-year-olds declines by 18 per cent by scaling up nutrition-specific interventions.

It is yet to be seen if the projected plan will yield the desired goal.

Many families like Faizah’s cannot get the much-needed protein in their diet because the population in these IDP camps outweighs supplies of RUTF from donor organisations, and buying them from the market is more expensive.

The ready-to-eat diet specifically for children under five years of age who suffer from acute malnutrition is made from soybeans, red sorghum and groundnut.

Al-Mustapha Sani, the state coordinator of the Zamfara State chapter, said the supply of RUTF by donor organisations to malnourished children in IDP camps was inadequate, which prompted the group to develop an alternative solution.

“We found out during visits to some unofficial IDP camps in Anka, Maru, Gusau and Doumborou that RUTF meant for malnourished children were eaten by older children and adults because they were hungry and food was in short supply.

“Because of the chronic lack of balanced diet for malnourished children, we had to come up with a substitute food supplement that was cheap and accessible from locally grown crops in the region that everyone can eat,” he said.

The 2018 Demographic Health Survey reveals that 56 per cent of children under five years are more likely to be stunted, wasted, or underweight. However, Sani says the malnutrition and hunger in the state would continue if banditry continues to displace people from their homes.

“The solution to these staggering figures of child malnutrition in Zamfara State will take place when people residing in IDP camps are relocated to their original homes where there is a regular supply of a balanced diet for children under strict supervision,” he said.