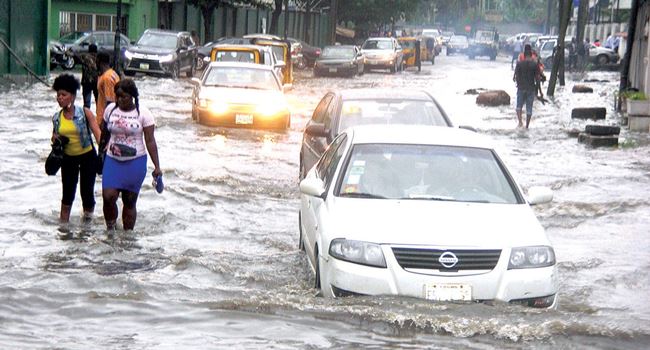 A student of Adekunle Ajasin University, Akungba, Ondo State was on Tuesday swept away in a heavy rainstorm that ravaged some communities in the state.

Properties worth millions of naira and belonging to the residents of the communities were lost in the rain that lasted more than 13 hours.

It was learnt that the heavy rain started on Monday evening and ended at 12:30 a.m. on Tuesday.

The deceased student simply identified as Doyin, was reportedly swept away by a heavy flood into a canal within the Akungba community.

It was gathered that the development led to hours of gridlock on the ever-busy Ado-Ijan-Ikare Akoko Road as Ureje Bridge was completely submerged.

A resident, Mr. Ajayo Tokunbo, told Ripples Nigeria that some vehicles were swept away in the heavy rain.

He said: “It was more than terrible. At a time we were thinking the end has come because the flood took people by surprise when it started moving vehicles from a spot to another.”

Meanwhile, other victims also counted their losses in the sad incident that wreak havoc on their properties.

It was gathered that the Ondo State Commissioner for Agriculture, Otunba Gboyega Adefarati, later paid a sympathy visit to some of the affected places.

Adefarati equally cautioned those in the habit of blocking the drainages with refuse to desist from such act, as this practice always leads to flooding.

The Divisional Police Officer (DPO) in charge of Akungba, Shakiru Ajibola, a Chief Superintendent of Police (CSP), confirmed the incident and said three persons, including a landlord of the house where the girl was carried away by the flood, were rescued.

He noted that divers were still searching for the missing undergraduate in the rivers around the area.

Already, many roads in Akokoland have become impassable as serious erosion has affected them, especially Jubilee road, Hospital junction, Bankole road, Ilepa, Ikare, Okoja Awara road, Irun to Ojeka, Irun to Surulere to Oluta and Okeagbe to Afin to Eshe.

2020 Budget: Buhari has done what his predecessors could not – BMO