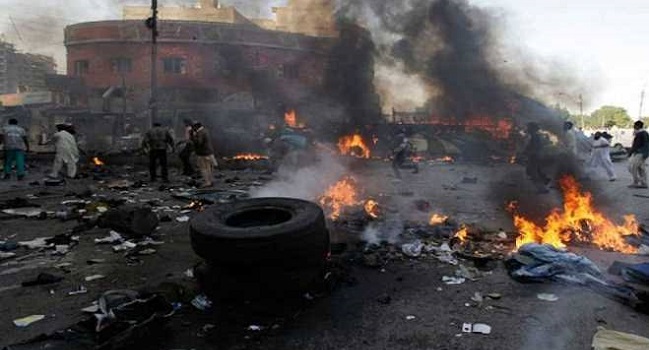 No less than 11 persons were killed at the weekend following a twin bomb blast carried out by two teenage girls, said to be Boko Haram suicide bombers, on the outskirts of Maiduguri, Borno State capital.

The incident also left no less than 43 others in one of the terrorised states of Nigeria’s North East injured.

It was learnt that the two teenage girls had innocently walked through a street of Muna, five kilometres away from the metropolis, looking like strangers in search of  a house where a wedding ceremony was taking place.

The teenagers, who later turned out to be suicide bombers, were said to have detonated explosives on them to cause the havoc.

According to the national and state emergency agencies who evacuated the victims, five people died as a result of the incident. But civilian JTF personnel, who participated in the exercise, said they evacuated eight corpses; while three out of the injured ones died at the hospital.

“As a result, three persons died and two bombers while close to 41 others sustained various degrees of injuries. The injured are currently receiving medical treatment at General Hospital Maiduguri.”

Usman Kachalla, his counterpart from SEMA said, “We have evacuated the wounded to the Specialist Hospital but unfortunately three persons died at the spot (excluding the bombers) and 46 other are receiving medical attention at State Specialist Hospital.”