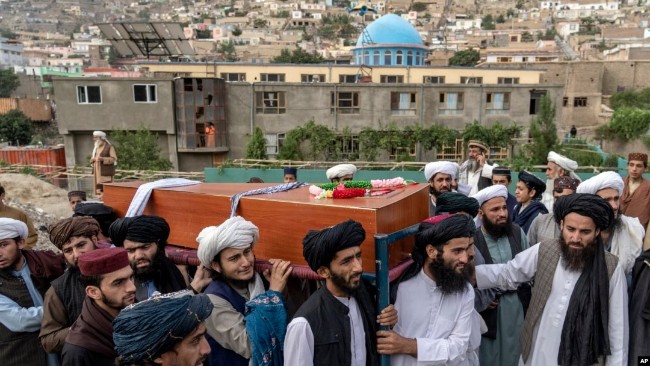 According to Taliban officials in Afghanistan on Thursday, at least 21 people have died as a result of an overnight bombing inside a mosque in Kabul.

A police spokesperson, Khalid Zadran who spoke to the VOA in Kabul disclosed that at least 33 worshipers also sustained injuries.

During Wednesday’s evening prayers, witnesses and police reported a massive explosion that tore through the Siddiquiya Mosque in the city’s northern Kher Khanna area.

Amir Mohammad Kabuli, a well-known Afghan scholar and Sufi cleric, was claimed to be among the victims.

Two of the 27 casualties brought to the facility from the blast scene were already dead, according to a statement from the Italian-run Emergency7 charity hospital in Kabul, while a third patient passed away in the ER. According to the report, five kids, including a 7-year-old, were hurt.

Zabihullah Mujahid, the top spokesman for the Taliban government, denounced the murderous assault and promised that “perpetrators of such atrocities will soon be brought to account and will be punished.”

Nobody claimed ownership of the attack right away. However, suspicions were raised about the terrorist organization claiming to represent the Islamic State, which labels Sufi Muslims as polytheists.

Since the Taliban took over the country’s government a year ago, the Islamic State Khorasan Province, often known as ISIS-K, has increased its attacks there.

The terrorist group has carried out bomb attacks against Taliban members and civilians, especially Afghan Shiite Muslims who it labels as heretics.