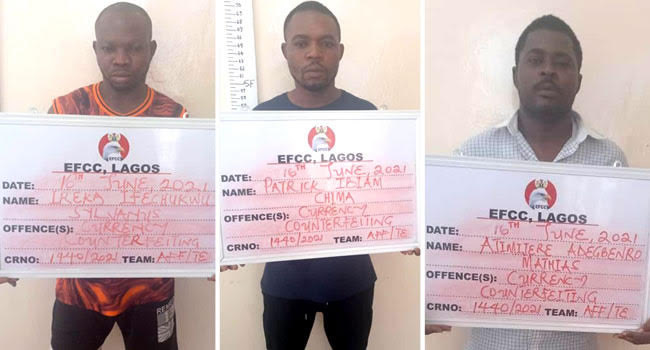 Three men, Sylvanus Ireka Ifechukwu, Patrick Chima Ibiam, and Ajimijere Mathias Adegbenro are in the net of the Lagos State Zonal Office of the Economic and Financial Crimes Commission (EFCC) for alleged conspiracy and currency counterfeiting.

Head of Media and Publicity of the anti-graft agency, Wilson Uwujaren, disclosed this in a statement in Abuja on Wednesday.

Uwujaren explained that the suspects were arrested by the Nigeria Police Force Intelligence Bureau, Force Headquarters on April 30 in the Obalende area of Lagos.

He noted that the three men were subsequently handed over to the anti-graft agency for further investigation and prosecution.

“The suspects, who are into currency counterfeiting, allegedly have a network spread across the globe,” the statement read.

Meanwhile, the EFCC spokesman noted that investigations revealed that the suspects have an operational base located in Brazil, saying they were allegedly involved in the production of fake foreign currencies such as US dollars, pound sterling, and euros.

“Upon their arrest, some incriminating materials were recovered from them. The suspects will soon be charged to court,” the statement added.