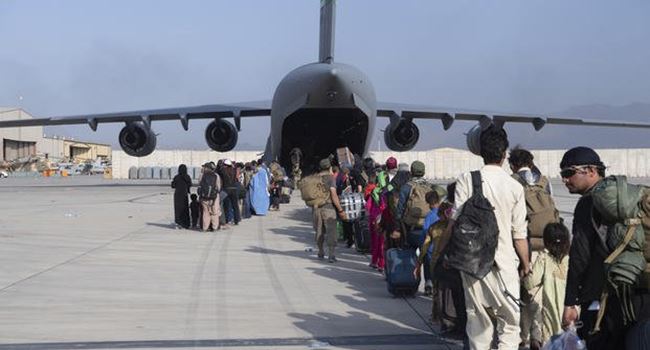 The United States has ended its 20-year war in Afghanistan with the final evacuation of its citizens and their allies from Kabul’s airport, the Pentagon said Monday.

The final evacuation efforts of the US effectively ends America’s longest war that began not long after the terrorist attacks of September 11, 2001.

The US last US flight out of the country, the Taliban effectively takesover operations at the Kabul airport.

According to the Pentagon, the last C-17 military cargo aircraft departed Hamid Karzai International Airport on Monday afternoon with the commander of U.S. Central Command, General Kenneth McKenzie, saying there were no Americans on the last five flights out of Kabul.

After the Pentagon’s announcement, President Joe Biden, in a statement on Monday evening, thanked the American military and said he would address the nation Tuesday afternoon about his decision not to prolong the U.S. mission in Afghanistan beyond August 31.

“The past 17 days have seen our troops execute the largest airlift in U.S. history, evacuating over 120,000 U.S. citizens, citizens of our allies, and Afghan allies of the United States.

“They have done it with unmatched courage, professionalism, and resolve. Now, our 20-year military presence in Afghanistan has ended,” the president said in the statement.

McKenzie, who oversees U.S. military operations in the region, said the Taliban did not have direct knowledge of the U.S military’s time of departure, adding that commanders on the ground “chose to keep that information very restricted.”

“But they were actually very helpful and useful to us as we closed down operations,” McKenzie said of the Taliban.

The four-star general added that there were no evacuees left at the airfield when the last C-17 took off and confirmed that all U.S. service members and troops from the Afghan military force along with their families were also airlifted out on Monday.

As of early Monday, U.S. and allied forces evacuated 1,200 people out of the Afghan capital on 26 military cargo aircraft flights in a 24-hour period, according to the latest figures from the White House.

About 122,800 people have been evacuated since the end of July, including about 6,000 U.S. citizens and their families.

Taliban executes famous Afghani musician due to ban on music