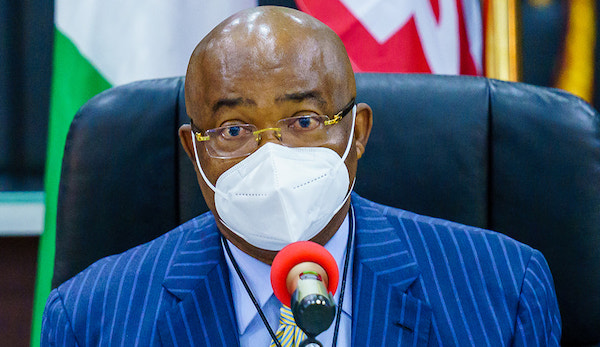 Imo State government has discovered the existence of ghost workers on its payroll leading to monumental fraud, Governor Hope Uzodinma said in Owerri on Monday.

Addressing newsmen as part of activities marking his first anniversary in office, Uzodinma said ghost workers and ghost pensioners had been receiving monthly salaries and pensions in the state.

“This government has paid every genuine worker; those complaining of non-payment are either ghost workers or fraudsters.

“I am challenging anybody who has not received his or her salaries to come to Government House with his employment details and we will pay him or her immediately,’’ he said.

The governor said that the era when Permanent Secretaries were chosen through appointment was over.

He added that Directors must pass promotion examinations and interview processes before being appointed as Permanent Secretaries to ensure that only competent people were appointed.

He also promised to revive all abandoned state-owned industries to enhance the state’s economy.

The governor said that to this end, he had commissioned a consulting firm to identify such industries and recommend ways of rejuvenating them.

Uzodinma said he would upgrade the Imo State Zoological Gardens and Wildlife Park to a world-class facility to position the state as one of the tourism centres in the country.

He said he would address the challenge of encroachment on the zoo premises by the host community.

On his achievement in the last year, the governor said he had delivered good governance and assured that he would not renege on his campaign promises.

Uzodimma also pledged to ensure the protection of lives and properties of the people and condemned the recent killing of two siblings in the Ihite-Uboma council area.

The murder led to the burning of the Police Divisional office in the area by a mob.

The governor promised to ensure that the dead got justice and warned against the destruction of social infrastructure during crises.