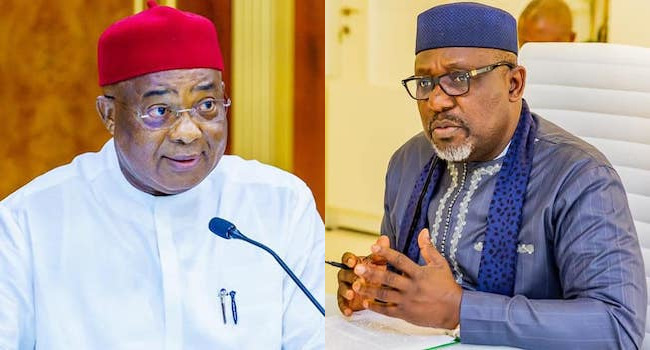 Former Imo State Governor, Rochas Okorocha, says his successor, Hope Uzodinma’s mission in the state was to kill and destroy, and does not have the capacity and what it takes to govern a state in a democratic setting.

Okorocha, now the Senator representing Imo West senatorial district in the National Assembly, in a statement issued by his Special Adviser on Media, Sam Onwuemeodo, said the present “government in the state is a counterfeit of what a state government should be.”

In the statement made available to Ripples Nigeria on Saturday, Okorocha accused Uzodinma of throwing Imo into a cesspit of ineptitude and insecurity where killings, kidnappings, and ritual killings have become the order of the day.

“Governor Hope Uzodinma came to Imo to kill and to destroy, not to build and he succeeded in his mission.

“Imo State and her people have not known peace since Chief Uzodinma became governor. They have only been hearing stories of killings, arson, kidnapping, invasion, rituals. What they never witnessed when the righteous ones were in power or on the throne.

“Governor Uzodinma and his government have become itching experiences Imo people won’t forget in a hurry.

“The government has made Imo people see their ears with their eyes. And the daily prayer on the lips of every sincere Imo man or woman has been ‘may this nauseating cup run over.’

“During my governorship for 8 years, militancy was a big issue in the oil-producing areas of Ohaji, Egbema and Oguta. I didn’t begin to supervise the killings. As a leader of his people, I employed and deployed diplomacy and got that problem solved.

“But under Governor Uzodinma, the killing of Imo people seems to have become the rule, instead of the exception. And the government is not regretting the killings, but only labouring to justify them.

“Under my administration, the opposition was encouraged to function unhindered. Every part of the state was alive and bubbling.

“Today, no part of the state is functioning. They are after the opposition. And they are not humble about their cluelessness and ineptitude.”