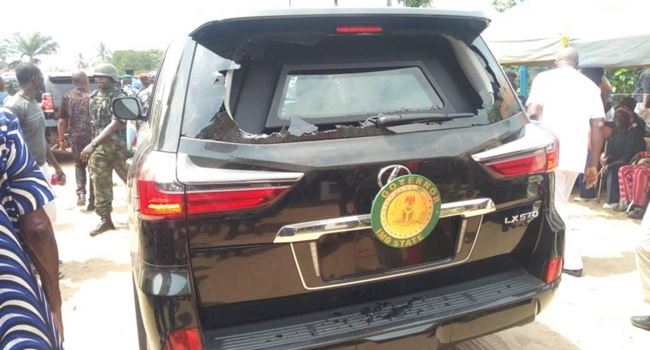 The Imo State governor, Hope Uzodinma, on Sunday, described the reported attack on his convoy as another fake news peddled by members of the Peoples Democratic Party (PDP) in Imo state.

The governor, who spoke with journalists in Owerri, said he would take lawful action against those circulating fake news in a bid to destabilize peace in the state.

He said the young man who was involved in the incident that damaged his vehicle had apologized.

However, contrary to the governor’s claim, his convoy was reportedly attacked by youths of the Mmahu community at Ohaji area of the state.

They threw bottles and sticks at the governor’s convoy.

His bulletproof vehicle was also damaged by the aggrieved youths.

Uzodinma said: “I was never attacked. What happened was that I went to the oil community where they had issues with one of the oil companies to settle the dispute.

“While we were in the hall deliberating on the matter with traditional rulers, some of the youths were outside quarelling. I was not even outside where it happened and after our meeting, we left.”

“But I was told that while they were quarelling one of them threw a stone on one of our vehicles in error. And when security operatives picked him he apologised that he threw it at some else but it mistakenly hit one of our cars.

“So there was nothing like an attack against me. It’s unfortunate that the PDP tends to politicize everything in this state. And i may take action against people fueling fake news in this state because it is not good for our people. These lies will not help anybody.”