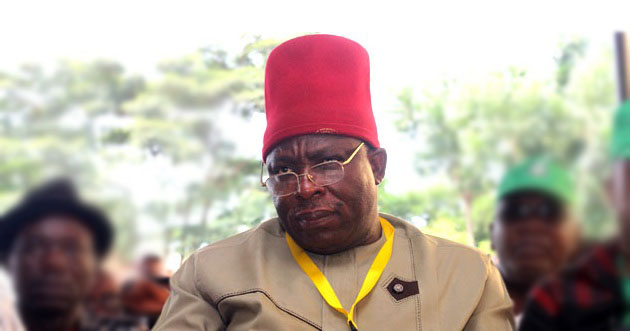 The incumbent senator representing Anambra Central senatorial district, Victor Umeh has called for the cancellation of Saturday’s National Assembly election in the district.

Umeh, who contested on the platform of the All Progressives Grand Alliance, APGA, made the call on Tuesday at a press briefing in Aguluzigbo in Anaocha Local Government Area of the state, alleged that the election was fraught with irregularities, adding that the Independent National Electoral Commission, INEC, lost control of the election due to its inability to declare a winner three days after the conduct of the poll.

According to him, it was obvious that the card readers did not work in majority of the places in the senatorial district.

“In Awka North Local Government Area for example, the card readers did not work in more than four or five polling units.

“They had to resort to a manual form of accreditation through which the umpire lost control of the voters.

“It was the same thing in many parts of Awka South Local Government Area.

Umeh also alleged that in Obosi, Idemili North Local Government Area, both violence and non-use of card readers for accreditation marred the exercise.

“The results being turned out from this will show you that card readers were not used for accreditation because of the high volume of voters. In Awka South, there were over 40,000 voters said to have taken part in the election,” he said.

The senator said that in his Aguluzigbo area where card readers worked it took an average of three minutes or more for one person to complete the process.

“If you look at it, you will discover that it was impossible for the large figures that were posted in many areas.

“Generally speaking, the election faced a lot of challenges; few days before the election, the card readers in the state were destroyed,” he added.

Continuing, Umeh claimed that the promise by INEC to replace the card readers did not materialise because what was brought at the end could not function at the polling units across the district.

“Results were also cancelled in a number of places like in Oba where the INEC cancelled results in 15 polling units in Oba ward 2, and INEC has not said anything about those places.”

Umeh said for the credibility of the exercise, the commission should cancel the exercise in Anambra Central Senatorial District and do a repeat of the poll.

“It is better to do so than to go ahead and make people go to Tribunal; it doesn’t make sense.

“INEC is in a position to do an audit of the election and come to the admission that they did not use card reader in conducting the election.

“For the fact that INEC did not keep to its provisions in the guidelines, the election should be repeated.

“The emphasis made by the commission that they will not accept manual accreditation for the election that turned to be the general situation is an indictment of the process.

“When I called the Resident Electoral Commissioner to complain about the anomalies, he said they were looking at the cost of repeating the election.

“Nothing will be more important than getting something credibly done; the important thing is to get it right,” he stressed.

INEC had declared Mrs Uche Ekwunife of the Peoples Democratic Party, PDP as the winner of the election.