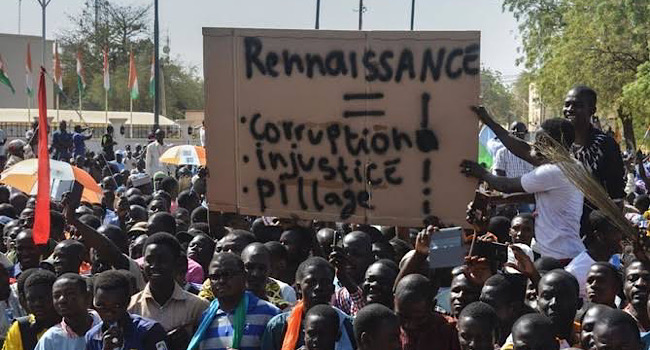 Violent protests broke out in Niger Republic on Tuesday, spilling into the early hours of Wednesday, after the West African country’s electoral commission named ruling party candidate, Mohamed Bazoum, the winner of the re-run presidential election.

Protesters blocked major highways in the capital Niamey, burning tyres and clashed with police trying to disperse the demonstrators.

The 61-year-old Bazoum, a former interior minister, won just over 55% of the vote in Sunday’s election run-off, according to the electoral commission.

The provisional results must, however, still be confirmed by the constitutional court.

Supporters of Ousmane took to the streets of the capital Niamey and gathered at the headquarters of the ruling party but were quickly dispersed by police who fired teargas, according to reports.

Ousmane’s campaign alleged fraud before the results were declared and said there had been theft, ballot-box stuffing and threats against voters, without providing evidence.

The electoral commission has yet to comment on the accusations of irregularities.

Voter turnout was pegged at 62.91%, according to the electoral commission.

The election was supposed to usher in Niger’s first transition from one democratically elected leader to another after President Mahamadou Issoufou announced he was stepping down after two five-year terms.

Bazoum thanked voters on Twitter after the result was announced that he would be a “loyal servant to confront all the problems our country is facing.”

Niger has been marred by coups since the country’s independence from France in 1960 and is also the world’s poorest nation according to the UN’s development rankings for 189 countries.