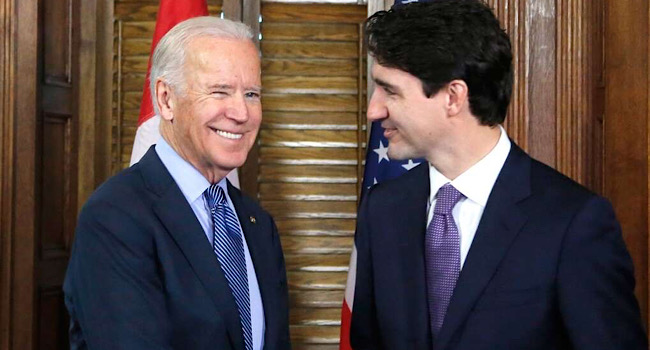 The President of the United States, Joe Biden, and the Canadian Prime Minister, Justin Trudeau, have begun moves to repair the fractured relationship between the two countries caused by former President Donald Trump.

In a video conference between the two leaders on Tuesday, Biden and Trudeau discussed how they can bring back the cordial relationship the two countries had before the Trump regime came on board.

Tuesday’s conference was Biden’s first virtual meeting with a foreign leader to restore a sense of normalcy to a core relationship brusquely upended by Trump.

During his four years in office, Trump often cast America’s northern neighbor, close ally and key trading partner as an economic predator and insulted Trudeau as “two-faced,” “weak” and “dishonest.”

In addition to belittling Trudeau, Trump had imposed a 10 percent tariff on Canadian aluminum imports, saying that Canada was taking advantage of the US.

While speaking to the Canadian PM, Biden said:

“The United States has no closer friend than Canada.

“We’re all best served when the United States and Canada work together and lead together.”

“U.S. leadership has been sorely missed over the past years.”

Trudeau added that he was “really excited” to be working with the United States again on climate change, a top priority for the Canadian leader as well as for Biden.

After their meeting, Biden and Trudeau delivered statements from the East Room of the White House, and in their statements, the two leaders said they would cooperate not only on climate change but also on the coronavirus, as well as on restoring their respective economies and combating racial discrimination.

“As the leaders of the major democracies, we have a responsibility to prove that democracy can still deliver for our people,” Biden said, in an implicit reference to countries like Russia and China.

“There are a lot of leaders around the world who are trying to make the argument that autocracy works better.

“I look forward to when we’ll be able to meet in person.

“We have a robust agenda today and we’re all best served when the United States and Canada work together and lead together.”

Repaying the compliment, Trudeau said the countries would work “together to get through Covid but also to make sure we’re pulling our weight around the world and making the world a better and safer place for everyone.”