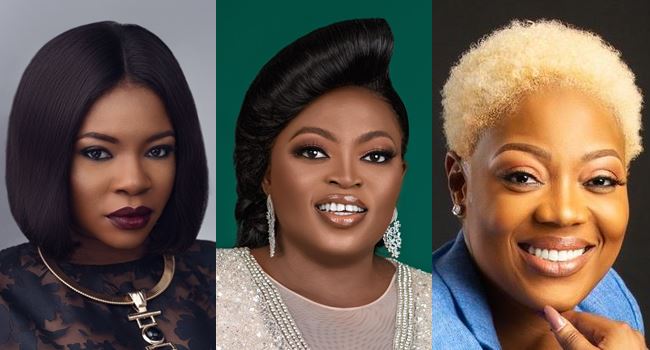 Following the recent success of Funke Akindele’s ‘Omo Ghetto‘ and Toyin Abraham’s ‘Alakada Reloaded’, it is safe to say women have mastered the art of executing blockbuster projects in Nigeria.

A handful of popular movies on the streaming platform, Netflix were either directed or produced by a lady. Women in the entertainment industry today have honed their craft exceptionally well and are primarily concerned about putting out impeccable production.

Without taking away the works of men in the movie industry, it is ideal to study the route that women have taken to attain massive success.

For instance, Kemi Adetiba’s work on ‘The Wedding Party 1‘ gained positive reviews from critics compared to the second part, directed by Niyi Akinmolayan who was unable to replicate the same effect.

These women each have something to imbibe in us, we will be unravelling their prowesses today.

On today’s list, we will be unveiling women who have directed several impressive works in recent years.

Prior to venturing into movie direction, Kemi worked as a video music director, she directed Olamide’s hit single ‘Sitting on the throne which was a classic and quite exceptional.

She directed the movies The Wedding Party in 2016 and King of Boys in 2018. Her directional works are always elegant.

Blessing is renowned for making movies that are women affiliated. She directed the Nigerian series Lekki Wives, then took on movie projects such as Two brides and a baby, one room, this thing called marriage and the woman.

All her movies unveil the agonies of womanhood.

Tope Oshin was the first female to direct the popular television series Tinsel, she shot five seasons and a total of 350 episodes.

She is one of the leading female directors in the industry, she has directed several other prominent projects such as Shuga (season 3 and 6), Fifty, Journey to Self, The Young Smoker, Hush and The Apprentice Africa.

She is one of the most respected filmmakers in the industry.

She is primarily a screenwriter, movie producer and director. She is a giant in the movie industry and most of her movies discuss dark issues e.g the movie Code of Silence narrates the story on rape in 2015.

Her first solo project was Breaking Point and she has since directed movies such as Games women play and Reloaded, just to name a few of her great works.

The beautiful and charming Omoni Oboli has worked on several movie projects. She directed the movies Being Mrs Elliot, 1st lady, Okafor’s Law, a movie that grossed over 90 million Naira as at the time of its release.

Most of her movies are concentrated on empowering gender equality.

Bolanle produced the movie ’93 days’ that portrays the 2014 nefarious Ebola outbreak that occurred in West Africa.

She is a trained lawyer and businesswoman, she also owns the art and culture centre Terra Kulture which is located in Lagos, Nigeria.

She directed the movie Ije which featured Nollywood’s most successful actresses Genevieve Nnaji and Omotola Jolade-Ekeinde.

She obtained her B.A in Theatre Art from the prestigious University of Abuja, Nigeria. In 2005, she moved to the United States where she obtained a master’s degree in Directing at the New York Film Academy (NYFA).

Bunmi directed the comedy web series ‘Skinny girl in transit’ and the star-studded Nigerian movie My wife and I.

Uyaiedu is the younger sister of Nollywood actress, Nse Ikpe-Etim.

The film is touted to be the first full-fledged lesbian film in the history of Nollywood. It is also widely believed to be the first Nigerian LGBT film. Specifically, the film focuses on the lives of a same-sex women couple who face challenges of being lesbians in Nigeria.

In 2020, Ikpe-Etim was listed as one of the BBC’s 100 Women for 2020, recognising her contributions to women’s rights in Nigeria.

One of the most hardworking and creative acting personnel in the industry.

Funke made her acting debut in 1999 and gained mainstream prominence in 2008 with the comedy movie Jenifa which she wrote and directed.

She elaborated the movie into series and it is currently in its tenth season. She also created the series Industreet which gives young actors the opportunity to perform.

Her movie, ‘Omo Ghetto’ now holds the record of becoming the highest-grossing movie of all time in Nigeria, breaking a four-year record of Kemi Adetiba’s movie titled ‘The Wedding Party’.

According to a statement released by the Cinema Exhibitors Association of Nigeria (CEAN), in January 2021, the movie has grossed N468,036,300 after maintaining its number one spot in 3 consecutive weeks.