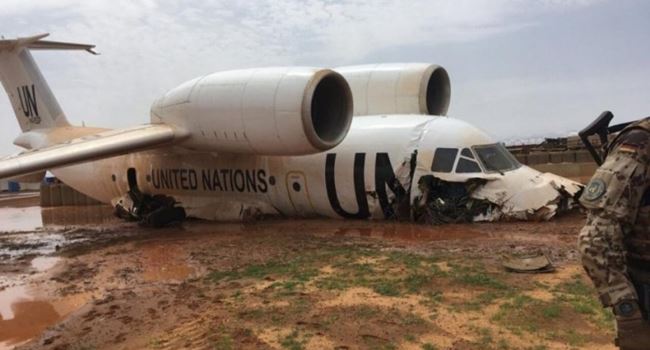 A United Nations plane has reportedly skidded off the runway as it negotiated landing at the Gao Airport, Mali.

The incident, according to media reports from Mali has left 11 people injured.

A statement from the Russian Embassy, which confirmed the incident on Monday, stated that “the crew of the UN aircraft will be evacuated to the country’s capital, Bamako later on Tuesday.

Media account of the devastating incident revealed that “the plane, en route from Bamako to the Malian city of Gao, made a hard landing on Monday, resulting in injuries for all the people on board,” comprising of “four UN staffers and seven crew members.”

Commenting on the medical intervention as delivered by the airport, the release from the embassy stated that “those injured have received medical assistance in the airport.”

However, it explained that a Russian citizen, who had his leg broken due to the hard landing, is currently in hospital, a development delaying the Russian authority from demanding explanations around the incident.

It read: “We have not discussed the reasons (of the incident) with Utair, as we are mainly interested in the health condition of the Russian citizens.

“We have not asked them about the reasons, as we assume it is their business and the business of their clients,” the embassy added.