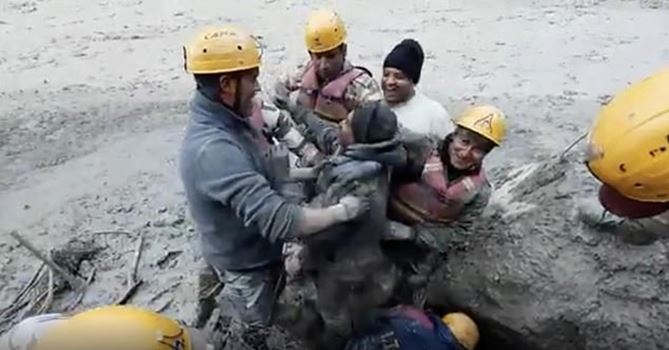 Tragedy struck in India after a chunk of glacier broke off in the Himalayas and unleashed a devastating flash flood which claimed fourteen lives and left one hundred and seventy others missing.

Rescue officials say after a part of a Himalayan glacier broke away; it set off a torrent of water, rock and dust down a mountain valley, rendering many residents around the area homeless.

“A total of 15 people have been rescued and 14 bodies have been recovered from different places so far,” the state government of Uttarakhand, in the country’s north, said on Twitter on Monday.

Sunday’s violent surge swept away a small hydroelectric project called Rishiganga and damaged a bigger one further downstream. “There was a cloud of dust as the water went by. The ground shook like an earthquake,” said a resident Om Agarwal.

Reports say rescue officials who resumed early on Monday are having a tough time searching for possible survivors at the site as hundreds of military personnel were also deployed.

“There are a lot of questions being asked about why hydroelectric power plants were being built in such ecologically sensitive areas,” Al Jazeera’s Elizabeth Puranam said.