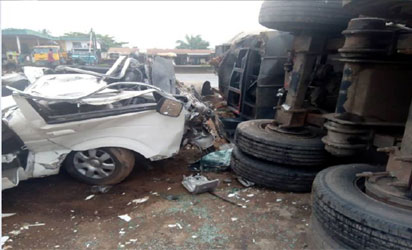 A tragic scene was averted in Ore, a commercial town in Ondo State when a gas-laden truck fell on a 14-seater bus with no fewer than 15 people escaping death.

According to reports, the passengers had just alighted from the bus when the incident happened as the articulated truck fell on the bus, thereby averting an Eid-el-Kabir day tragedy.

Moments after the truck which lost control while on speed and fell on the commercial bus parked beside a restaurant on Ore-Lagos Express Road, scores of passengers were seen thanking their stars.

Read also: 3 days after, another body pulled out from rubble of collapsed mall

Some where seen rolling on the ground and thanking God for their escape.

The incident was confirmed by Rotimi Adeleye, the Sector Commander of the Federal Road Safety Corps, FRSC.

He said, “the gas-laden truck, which lost control, fell on a 14-seater bus parked at a restaurant on Ore-Lagos Expressway.

“It hit the side of the bridge before falling on the passenger bus. No life was lost. All the passengers have already alighted from the bus to eat in the eatery, when the incident occurred.

“No explosion and gas leakages occurred during the crash. Imagine what would have happened if the truck driver did not install stock valve in his vehicle.”