Home » Metro » “2 fighting”, man in police trouble after he pushed another to the ground killing him 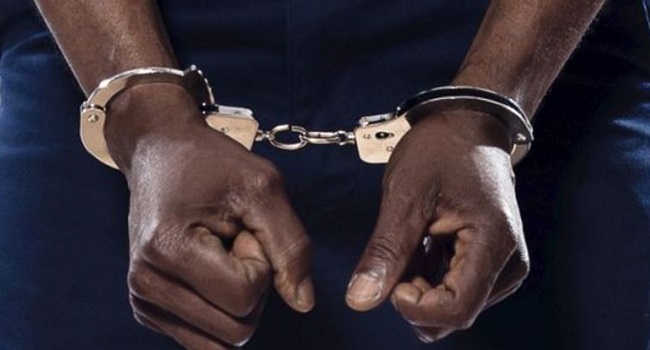 One Amos Ekuma has been arrested by the Lagos State Police Command for alleged murder after he pushed down a neighbor of his, leading to his death.

This was disclosed by the state Police Public Relations Officer, Bala Elkana, in a statement on Sunday, adding that four other suspects, who are yet for be indentified but members of the Aiye Confraternity were also arrested for alleged murder.

The cultists were said to have murdered one Enoch Obaro and dumped his body in a bush.

The state PPRO further stated that a man identified simply as Actor used an iron rod to attack Ekuma, who retaliated by pushing his attacker, to the ground and he died in the process.

Elkana added that Actor’s corpse had been deposited in a mortuary while Ekuma was undergoing discreet investigation.

“On Saturday, December 14, 2019, around 2pm, one Amos Ekuma, of No. 59 Ajipon Street, Ogijo, Ogun State, reported himself to the police in Ikorodu that he was in his shop on Friday, December 13, 2019, around 7pm along Sabo Road by Kokoro Abu in Ikorodu, when a laundryman beside his shop, popularly known as Actor, attacked him with an iron rod as a result of an argument that ensued between them earlier in the day, which was resolved by neighbours.

“He stated that when he, Ekuma pushed him, the said Actor fell down and was rushed to the Ikorodu General Hospital for treatment, but died while on admission. The corpse was deposited in the mortuary for autopsy. The suspect is in our custody for discreet investigation by homicide detectives from the State Criminal Investigation and Intelligence Department, Yaba”, Elkana said.

In a related development, three yet-to-be-identified suspects have been arrested for the killing of one Enoch, whose decomposing body was recovered from a bush around the Fadayin junction in the Imota area of Ikorodu.

According to Elkana, the mutilated body of Enoch was recovered from the bush after he had been declared missing when his wife, Yemisi, reported to the police that he left home and never returned.

Elkana stated: “On Tuesday, December 3, 2019, around 8.30pm, one Yemisi Obaro of No. 5 Surulere Street, Agbowa, reported at the Agbowa Police Station that her husband, Enoch Obaro, 30, left home in the morning and did not return.

“She stated that all efforts to trace his location proved abortive. The message was sent to all police stations across the state through the police control room to help in finding Enoch. On Sunday, December 8, 2019, around 2.30pm, the police received a call that Enoch’s remains were sighted at an isolated bushy area by the Fadayin junction, Imota, Ikorodu.

“A team of homicide detectives was drafted to the scene, where the decomposing body of Enoch was evacuated for autopsy. The corpse was mutilated with the two hands severed and a leg cut off. Expended cartridges and broken bricks were equally recovered from the scene.

“Three suspects were arrested in connection with the murder. They are members of the Aiye Confraternity, who were on the police wanted list for various offences ranging from armed robbery, violent attacks, cultism and land-grabbing. The suspects will be charged.”