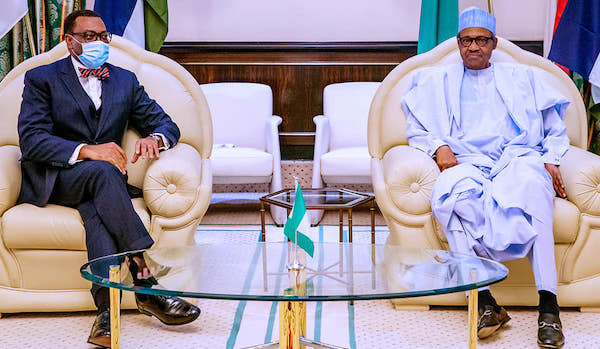 President Muhammadu Buhari on Tuesday held a closed-door meeting with the President of the African Development Bank (AfDB), Dr. Akinwumi Adesina, at the Presidential Villa, Abuja.

The Personal Assistant on New Media to the President, Bashar Ahmad, disclosed this on his Twitter handle.

The United States Department of Treasury had called for an independent probe of corruption allegations against Adesina despite being cleared by the bank’s ethics committee headed by Takuji Yano on May 5.

The US Department accused the AfDB president of allegedly breaching the Bank’s code of ethics.

Several former African presidents including Nigeria’s Olusegun Obasanjo and Goodluck Jonathan had rallied support for Adesina on the matter.

The Nigerian-born Agricultural Economist is seeking re-election as AfDB president in the poll slated for August.