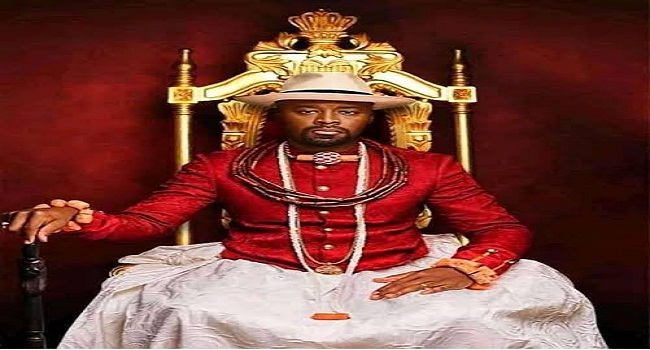 Prince Utieyinoritsetsola Emiko was on Saturday crowned Ogiame Atuwatse III, the Olu of Warri at an elaborate ceremony, at the Itsekiri Kingdom in Warri, Delta State.

Emiko is the son of the 19th Olu Atuwatse II, Godwin Toritseju Emiko and Gladys Durorike Emiko, and according to tradition he will be henceforth addressed and referred to by his new dynastic name.

The new Olu who is a descendant of Olu Akengbuwa, finally took the throne of his forebears after controversies that had trailed his nomination for the throne.

Many prominent leaders of the Itsekiri Kingdom had opposed his sitting on the throne, claiming that his mother was not of Itsekiri descent.

The main opposition came from the Ologbotsere of Warri Kingdom, Chief Ayirimi Emami, who cautioned the Ginuwa I Ruling House and kingmakers of the Warri Kingdom against going ahead with plans to crown Prince Tola Emiko as the 21st Olu of Warri is yet to settle down.

Emami warned that a coronation done against the terms of the 1979 Edict would not stand, adding: “Even if they go ahead with their coronation, the Edict will have the last laugh.”

Few days to the coronation of the new king, the 400-year-old crown, which is the symbol of the Itsekiri monarchy was reported missing.

The Nigeria Police Force, Zone 5, Benin had on Monday declared two sons of the immediate past Olu of Warri, Ogiame Ikenwoli Godfrey Emiko, wanted in connection with the missing royal crown.

Saturday’s coronation follows a series of activities including colourful dance performances by various cultural groups and pleasant musical renditions from the Warri Royal Choir and Laz Ekwueme Orchestral, among others.

One of the high points of the event was the selection of a ceremonial sword among 20 others by the Olu while blindfolded.

According to tradition, one of the 21 swords which bear the names of his 20 predecessors is usually left unnamed, while the monarch is expected to use the name of the predecessor he picks as his title throughout his reign as the 21st Olu.

However, in the event where he picks the sword that has no name attached to it, the monarch is at liberty to announce a new title or pick that of any of the predecessors of his choice.

Meanwhile, he performed three symbolic chores for the last time which included fetching water in a clay pot, splitting wood with an ax, and paddling a canoe.

After he took the oath of office and adopted a title for his reign, the Olu of Warri was crowned by the Uwangue of Warri, Chief Gabriel Awala, leading to the change of his name from Omoba Tsola Emiko to Ogiame Atuwatse III.

President Muhammadu Buhari was represented at the event by the Deputy President of the Senate, Ovie Omo-Agege, whose mother hails from the Warri Kingdom.

Meanwhile, the monarch is married to Ivie Uhunoma Emiko, daughter of Edo business mogul, Idahosa Okunbo, and they are blessed with three children.