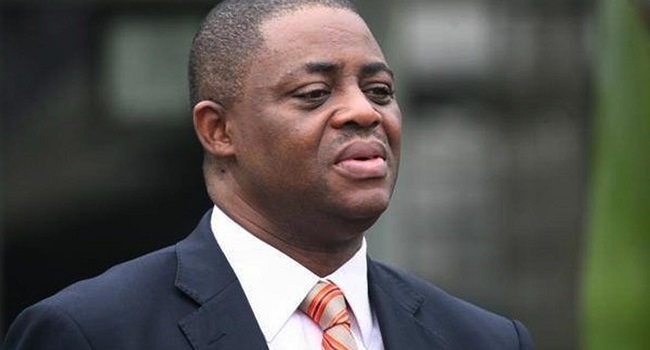 A former minister of aviation, Femi Fani-Kayode, has again engaged in a hot exchange with The Church of Satan on Twitter which has since gone viral on the social media platform.

In his post on Twitter, the chieftain of the Peoples Democratic Party (PDP) called on God to destroy the Church of Satan’s temple and their disciples anchoring his call on claims that they were what he termed ‘the seeds of Belial and the offspring of the serpent.’

While sharing a photo of the church on his Twitter time-line, the politician wrote: “‘Angel’, the ritual guild leader for the Satanic Temple of Washington state, leads the procession up the Capitol steps as part of their satanic ritual.

“Behold the seed of Belial, the offspring of the serpent and the children of Beelzebub.

“May the Lord rebuke thee Satan. May the Lord crush your citadels, pull down your temples, burn your alters, and scatter your disciples.”

After sighting Fani-Kayode post on Twitter, the church fired back at the former minister asking him to endeavour to read.

The church wrote in reply: “Please learn to read.

“The Satanic Temple is a political activist group that exists to troll politicians and use ‘Satan’ to get headlines, press attention, and fool people.

READ ALSO: Nigeria will not last next five years as a unit —Fani Kayode

“They have nothing to do with us or the established religion of Satanism. Satanists are atheists, we don’t believe in a god or a devil.

Recall that Fani-Kayode was also involved in a hilarious exchange with the Church of Satan in June last year when he tagged a former prosecutor in New York, US, Linda Fairstein, a “racist, a witch and a member of the Church of Satan,’’ on Twitter.

This was after he watched a 2019 Netflix mini-series, ‘When They See Us’, which exposed the breakdown of the U.S. criminal justice system during the Central Park Five case.

Fairstein, now a crime novelist, played a role in the wrongful conviction of five teenagers for the brutal rape of a female jogger in 1989.

The black and Hispanic teenagers, known as the Central Park Five, were exonerated in 2002.

Mr Fani-Kayode, in the tweet which has been deleted, called for Fairstein to be handed a death penalty.

In response to his allegations of Fairstein being a member of the Church of Satan, the ‘church’ tweeted, “She has nothing to do with us, please leave us out of this.”

Mr Fani-Kayode responded, “Get thee behind me Satan!”, quoting a famous Biblical verse where Jesus Christ rebuked one of his disciples, Peter.

The church replied: “That doesn’t actually work. We are right here in front of you telling you that you are making false, unfounded accusations and asking you nicely to please leave us out of this as it has nothing to do with us.” 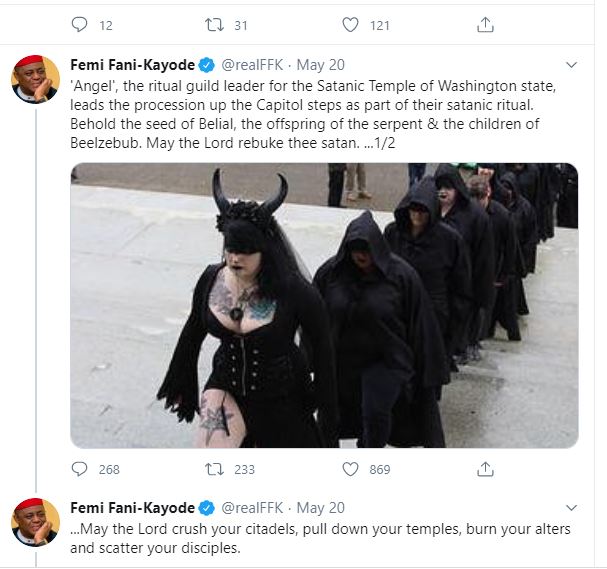