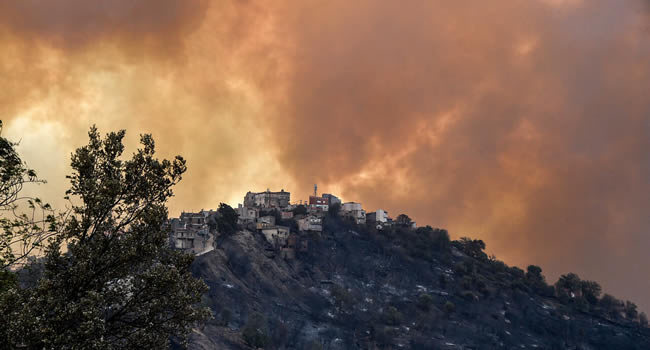 Not less than 65 people, including 25 soldiers, have died from wildfires ravaging mountain forests and villages east of Algiers, the capital of Algeria, an official statement on Wednesday from the office of the President, said.

The statement added that the soldiers lost their lives while trying to save residents from the fires as death toll rose from 17 earlier recorded on Tuesday night.

President Abdelmadjid Tebboune announced on his official Twitter handle that the soldiers were “martyrs” who saved 100 people from the fires in two areas of Kabyle, the region that is home to the North African nation’s Berber population.

In that particular rescue operation, 11 other soldiers were burned fighting the fires, four of them seriously, the Defense Ministry said.

A presidential spokesman later said on state TV that 17 civilians had lost their lives, raising the count of citizens from seven previously and bringing the total death toll to 65.

The mountainous Kabyle region, 100 kilometers (60 miles) east of Algiers, is dotted with difficult-to-access villages and with temperatures rising has had limited water.

Some villagers were fleeing, while others tried to hold back the flames themselves, using buckets, branches and rudimentary tools. The region has no water-dumping planes.

The deaths and injuries Tuesday occurred mainly around Kabyle’s capital of Tizi-Ouzou, which is flanked by mountains, and also in Bejaia, which borders the Mediterranean Sea, the president said.

Dozens of blazes sprang up Monday in Kabyle and elsewhere, and Algerian authorities sent in the army to help citizens battle blazes and evacuate, as multiple fires were burning through forests and devouring olive trees, cattle and chickens that provide the livelihoods of families in the Kabyle region.

Commuters stranded as rail drivers embark on strike in Germany