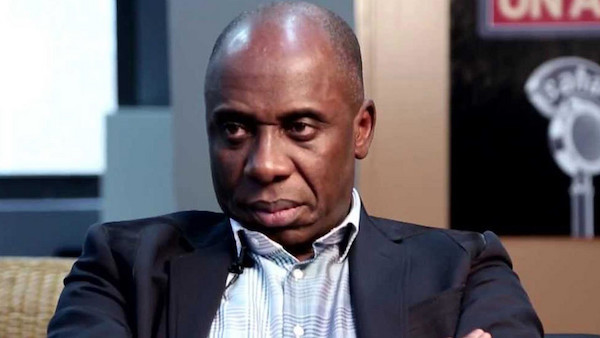 The Minister of Transportation, Rotimi Amaechi has slammed reports over a statement attributed to him that the administration had been printing money since 2015.

This disclaimer was contained in a statement issued via his media assistant, Mrs Taiye Elebiyo-Edeni, who said that the news should be disregarded as it was false.

Ripples Nigeria gathered that a media publication alleged that Amaechi granted an interview in 2019 admitting that President Muhammadu Buhari had always ordered the Central Bank of Nigeria (CBN) to keep printing money since 2015.

According to Amaechi, he has never held any financial institution in the country and therefore did not qualify as an authority on issues that concern printing of money into the economy.

“I have never head any financial institution in the country and therefore did not qualify as an authority in the issues that concerns printing of money into the economy.

“I advise Nigerians who want information on printing of money to find out from the appropriate agency and not circulate false statements to gain cheap publicity,” Amaechi stated.

Sheikh Gumi reveals those behind kidnap of Kaduna Varsity students