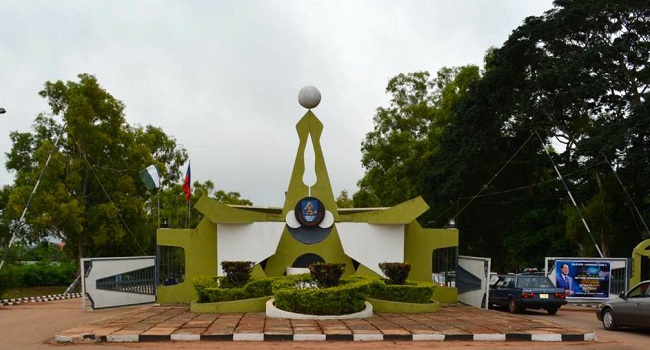 Chairman of the Academic Staff Union of Universities (ASUU), Ambrose Alli University, Ekpoma, Dr. Monday Igbafen, has been suspended by the university over alleged gross misconduct bordering on sexual harassment and threats of sex for marks.

This was revealed in the University’s news bulletin dated 13th February, 2019 and signed by the Deputy Registrar Information/Public Relations Officer, Edward Aihevba, titled, “Suspension of Dr. M.L. Igbafen, Associate Professor in the Department of Philosophy.”

The embattled ASUU chairman, however, denied the allegation, saying it was an attempt to cow him.

The official statement reads in part: “The university community is hereby informed that Dr. M. L. Igbafen, Associate Professor in the Department of Philosophy, has been suspended from duty following his arraignment before the Senior Staff Disciplinary Committee on allegation of gross misconduct bordering on sexual harassment and threats of marks-for-sex.

“He had earlier been accused of this offence and an investigative panel set up, which found him culpable and indicted.

“Recently, there was petition by the family of the female student involved, asking that Dr. M. L. Igbafen be brought to book, failing which the university management would be reported to ICPC for failure to act.

“On receipt of the petition, the university management asked for his comments. His response was found unsatisfactory. He was, therefore, arraigned before the Senior Staff Disciplinary Committee. As due process demands, he has been suspended from the university pending the determination of the allegation leveled against him.

“He is, therefore, not allowed to participate or be involved in any university duties, activities or functions, except those related to Senior Staff Disciplinary Committee during the period of suspension.”

Responding, Igbafen said he would expose the Vice Chancellor, Professor Ignacious Onimawo, to the world that blackmail does not work within the university.

He described the suspension as part of a grand plan to intimidate ASUU chapter of the university. He said the VC had a personal vendetta against him.

According to him, “It is a grand plot that will fail. The VC is desperate because he has so many things to hide. He is looking for a weak ASUU to manipulate.

“That petition was written against two of us when I was a Lecturer II in 2011. I answered it that my hands are clean. Is that why he is denying me of my promotion? Collate all the papers that will come out,” he said.