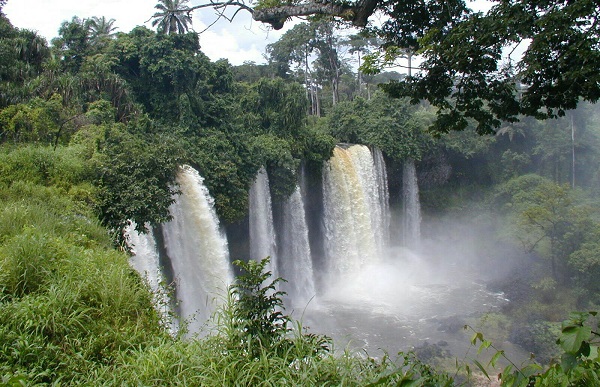 Another waterfall which is set to be unveiled, has been discovered at the Ife Grand Resort, Ile-Ife, Osun State.

This was disclosed by the Ooni of Ife, Oba Enitan Ogunwusi, on Saturday. He revealed this when executives of the Nigeria Tour Operators (NATOP) visited him at his palace.

Ogunwunsi said the land on which the resort was built, was home to wild animals. He explained that the animals had, however, been appeased and had moved further into the bush to make the area safe for operations and tourism.

According to him, in his quest to beautify the place and transform it into a world-class tourist site, a waterfall that beats human imagination was discovered and remodeled.

“This is a mysterious waterfall that has just been discovered. It elicits about seven colours of water including red, blue, green and so on.

“We are still doing some work on the site, and when the project is complete, the whole world will marvel; and this is one of the things that will sell our country internationally.

“The resort has been under construction for two years now; and when we are done, there will be nothing like it in the world,” he said.

According to Ogunwusi, since he assumed the throne of his ancestors, he has made many discoveries that were beyond human imagination and beats world science.

He described the discoveries as metaphysical things which truly attested to the myth that Ife was the cradle of mankind.

“We have too many discoveries in Ife that defy science; and which will blow the minds of tourists.

“Most of these mysterious discoveries are what we need to sell to the world because we cannot continue to shroud them in secrecy, which is the reason I decided to rebrand our heritage sites in Ife.

“This is a very ancient palace of more than 10,000 years; I have buildings of 300, 400 to 500 years within the palace and they have all become monuments which many people come from around the world to see.

“As a trained real estate developer, I have blended tradition and modernity in terms of design and concept of the palace,’ he said.

The monarch called on Nigerians to stop depending on the government to groom tourism but to rather tap into the tourism potentials at the grassroots.

He said this would create massive employment opportunities for the teeming unemployed youths and reduce crime in the society.

“We all must stop blaming government on the state of the tourism sector in Nigeria, let us take advantage of the huge tourism money spinners around us,” Ogunwusi advised.

POST-ELECTION VIOLENCE: CAN sues for peace among parties in Taraba

RIVERS POLLS: CSOs commend army for its ‘professionalism’ that ‘saved the state from explosion’