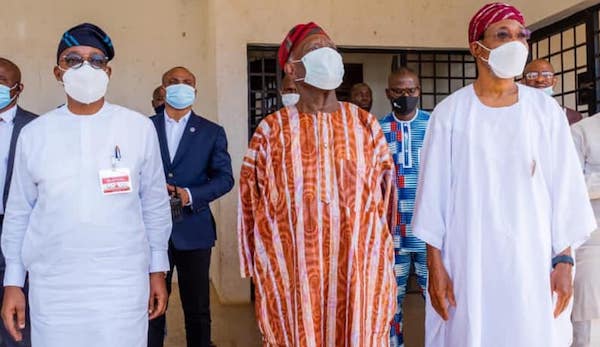 The Minister of Interior, Rauf Aregbesola on Thursday held a closed-door meeting with the former interim chairman of the All Progressives Congress (APC), Chief Bisi Akande, in Osun State.

Although the details of the meeting have not been made public, it may not be unconnected with the perceived feud between Oyetola and Aregbesola.

However, the duo have refrained from making public comments on the matter.

The minister, who announced the development on his Twitter handle, said he was in Osun to begin stakeholders’ engagement meeting as directed by President Muhammadu Buhari.

Aregbesola also attached the pictures of his visit to Akande with Oyetola.

Aregbesola wrote: “Earlier today, I arrived at the @StateofOsun with my entourage from the @MinofInteriorNG to begin my Stakeholders’ Engagement Meeting with different stakeholders in the state as directed by President @MBuhari.

“Our entourage paid a courtesy visit to our leader and father, Baba Bisi Akande, alongside Governor of the @StateofOsun, Alhaji Gboyega Oyetola in Ila Orangun. Baba advised us on #EndSARS and insecurity amongst other issues!”