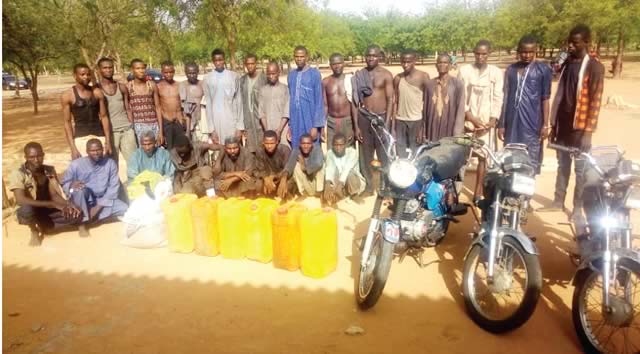 One Bawa Gomna, a Suspected kidnap kingpin, has been arrested by troops of the Nigerian Army alongside 20 bandits suspected to have been responsible for terrorising the Batsari, Jibia and Safana local government areas of Katsina State.

According to a statement on Sunday issued by the Spokesman for the Army, Col Sagir Musa, the suspects were arrested by troops of the 17 Brigade on Operation Harbin Kunama 3 between June 3 and June 21.

According to Musa, the arrests were made possible through credible intelligence provided by residents of the affected areas, adding that the suspects have confessed to various acts of banditry and kidnapping during interrogation.

Musa, who said the troops recovered motorcycles, foodstuffs, mobile telephone handsets and jerry cans of petroleum products from the bandits, hinted that the suspects would be handed over to relevant law enforcement agencies for further action.

He said: “In continuation of operations against banditry, kidnapping, cattle rustling and other criminalities in Katsina State, troops of the 17 Brigade arrested a notorious bandits’ kingpin, Mallam Bawa Gomna, and 20 others during operations around Batsari, Jibia and Safana local government areas of Katsina State.

“The army appreciates all those that provided the information that led to the arrest of the criminals and urged members of the public to continue to support security agencies with credible information in order to combat insecurity.”