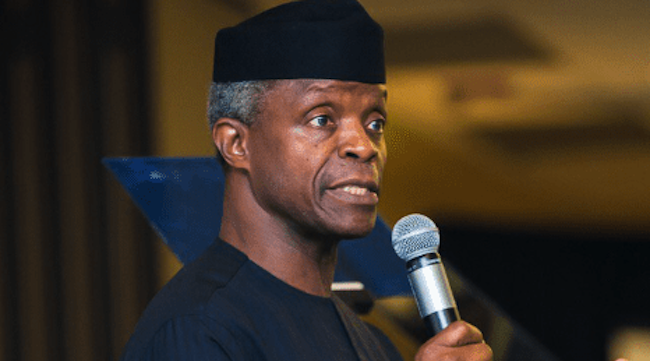 The Vice President, Professor Yemi Osinbajo, on February 19, expressed the willingness of the Federal Government to correct the distortions in the development of Niger Delta communities.

We selected two other engaging stories that made the rounds at the presidency in the past week.

Osinbajo, while speaking at Angiama community of Bayelsa State during the flag off ceremonies of the last phase of a bridge linking Yenogoa to Oporoma community said: “Communities like Oporoma, Angiama and others across the Niger Delta are host to large amount of mineral wealth and natural resources, so they deserve to have durable developmental gains to show for it.”

“We are on our way towards correcting the lapses in this respect with the collaborative efforts between the Federal, States and Local Governments, these lapses will be corrected,” he added.

The desire to correct noticeable distortions in the development of the Niger Delta region, as expressed by the Vice President, is a welcome gesture. For decades, the region had alleged deliberate plans to undermine its development, leading to the rise of militant groups seeking total resource control.

In promising to make amends, the Nigerian government must seek to clean up the rot in the Niger Delta Development Commission (NDDC) where the President appears to have turned the other eye, as the laws setting up the commission become flagrantly abused, and the organizational structure turned into the hands of a sole administrator supervised by the Minister of Niger Delta Affairs, Godswill Akpabio.

What becomes even a greater challenge is the penchant of the Federal Government not to match words with action.

Buhari on ritual killings, others

On February 17, President Buhari condemned the wave of ritual killings, deadly attacks against on-duty policemen and ethnic killings sweeping across parts of the country.

Buhari’s Senior Special Assistant on Media and Publicity, Garba Shehu, had quoted the President as saying, “I condemn these dastardly acts of violence and pray for the souls of the departed,” in a statement.

Buhari’s condemnations, and assurances, have become a bit too common, making his administration very predictable, and the perpetrators emboldened, knowing that Nigerian government’s threats have become empty in the face of inaction.

This time, Mr President must ensure that he marries his condemnations, and promises with requisite actions.

Osinbajo spoke in Abuja through the Minister of State for Industry, Trade and Investment, Maryam Katagum, who represented him at the maiden edition of the Abuja Chamber of Commerce and Industry (ACCI) Young CEOs Summit.

“Young people make up the bulk of Africa’s population with an estimated 75 per cent of the continent’s population below the age of 35 years. From a demographic point of view, this calls for a paradigm shift towards the recognition and support of young people to harness their potential,” he said.

Beyond advocacy, Osinbajo’s submission is one that must be systematically pursued through sustainable programmes and policies.

Sadly, most of government’s target initiatives for Nigerian youths, especially the Social Investment Programmes, have turned out to be mere political gimmicks designed to keep the youthful population distracted, instead of creating the most enabling environments for harnessing talents and building capacity for self-reliance.

Osinbajo must strive to ensure that the Nigerian government leads the way for other African countries to follow. It is not enough to make attractive statements to win audience’s applause.