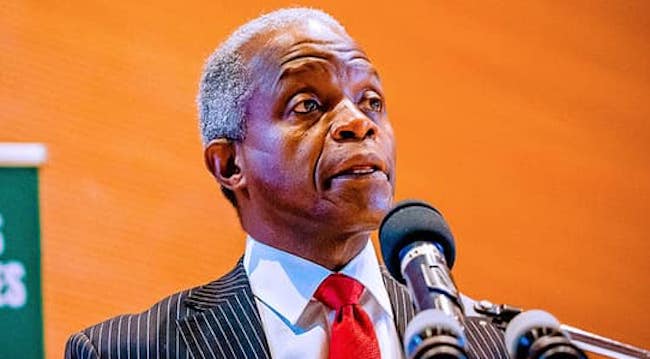 The Vice President, Yemi Osinbajo, last week, blamed religious leaders for the divisions, and tensions in the country.

We tracked two other stories that kept the seat of power, Aso Rock Villa, abuzz in the week in review.

On June 29, Osinbajo argued that when religious leaders fail to act responsibly, they inflict divisions, and tensions in the country.

According to a statement by Laolu Akande, the Vice President’s Senior Special Adviser on Media and Publicity, Osinbajo was quoted as saying:
“One of the fault lines that we have is religious divisions and the tensions that are created when religious leaders do not act responsibly enough in bringing together men and women of different faiths,” he said.

The premise upon which Osinbajo builds his blame may not be faulted easily. His submission finds bearing on the inciting comments and disposition of some religious leaders to national developments.

Though Osinbajo has the right to apportion blames, he should also be bold enough to blame the political class where he belongs. This is as the President Muhammadu Buhari-led administration has reportedly pursued, and implemented some policies leading to the mismanagement of Nigeria’s diversity.

In a statement issued by his Senior Special Assistant on Media and Publicity, Garba Shehu, he said: “And to the sadists, I say this: we are coming. No matter what rock you crawl under, what hole you sink into, what lie you hide behind, we are coming and we will find you. Shiroro will see justice. Nigeria will know peace.”

Amidst his threat to smoke out the terrorists, and make them pay for their heinous sins, is the fog of doubt that covers it.

This is largely linked to his numerous unfulfilled promises of dealing with the assailants who had killed, kidnapped, maimed, raped and displaced innocent Nigerians.

Until Buhari starts marching words with action, Nigerians will always find his threats to punish criminal elements as mere political statements aiming at nothing.

On June 27, Vice President Osinbajo boasted that Nigeria was winning the war against drug abuse.

“We are winning this war. The days of the scourge of drug abuse and dependency are clearly numbered, but it will involve even greater investment in focus and determination for the long haul,” he said while speaking at the United Nations International Day Against Drug Abuse and Illicit Drug Trafficking in Abuja.

Osinbajo’s confidence may rightly have been influenced by the encouraging strides of the National Drug Law Enforcement Agency (NDLEA) in prosecuting, counselling, and rehabilitating drug abusers across the country.

While the war has not been won, it is pertinent that the Vice President ensures that the NDLEA keeps getting all the resources, and support it needs to keep fighting the social menace.