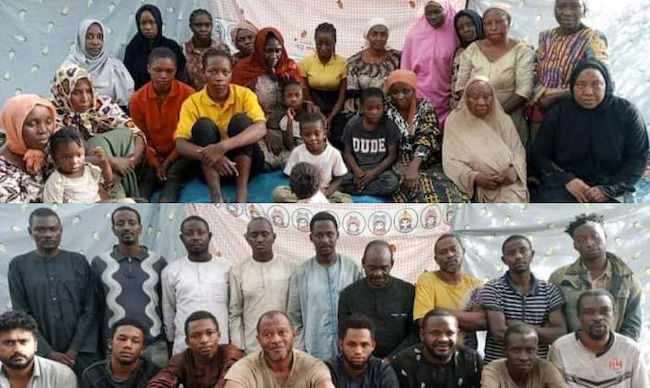 Terrorists who attacked an Abuja-Kaduna train have released two new photographs of the hostages about a month after the attack.

The photographs were released by the terrorists on Monday and posted on Facebook by Bilkisu Yero, a lecturer at the Kaduna State University.

Some family members of the victims who saw the photographs confirmed that their relatives were among the captives including men, women, and children.

One of the photos had 23 victims comprising mostly women and five children while there were 17 male victims in the second photograph.

“Oh my dear sister and mum, first and second on your right hand sitting on the floor. Allah ya fida ku baki daya,” one Yussuf Attah wrote.

Another Facebook user, Isma’el Yarima added: “I can sight my sister. May Allah protect you all.”

This is not the first time the terrorists had released evidence on the abducted victims in a bid to force the Federal Government to negotiate for their release.

A few days after the attack, they released a video clip showing the Managing Director/Chief Executive of Bank of Agriculture (BoA), Alwan Ali Hassan, who was later released by terrorists over old age.

A week later, the hoodlums released two video footages of some of the passengers in an unknown location and threatened to kill them if the government refused to meet their demands.

Two Improvised Explosive Devices (IEDs) planted by the terrorists in one of the train’s coaches went off and forced it to derail a few minutes into the trip on March 28 in Kaduna.

At least eight persons were confirmed dead, 30 injured and over 100 others abducted by the terrorists after the attack.

Related Topics:#featuredAbuja-Kaduna abducted passengers
Up Next