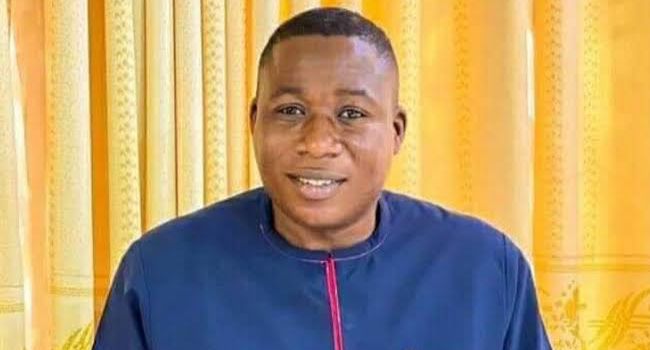 Embattled Yoruba Nation activist and freedom fighter, Chief Sunday Adeyemo, popularly known as Sunday Igboho, has heaped praises on the President of Benin Republic, Patrice Athanase Talon, for allegedly saving him from officials of the Nigerian government who were bent on killing him after his arrest in the West African country.

Igboho who was recently released from a Benin Republic prison after spending months following his arrest in July 2021 at the Cotonou International Airport on his way to Germany, said Talon did everything to make sure he was comfortable while in prison as he enjoyed maximum freedom including top class health care.

Igboho, who spoke in a video on Saturday, debunked stories that made the rounds earlier in the year that he was battling serious health issues, but stated that during his seven months in prison, he never fell sick as was erroneously carried about, describing those behind the “fake news” as uninformed.

Speaking in Yoruba language, Igboho said all attempts to kill him by the Nigeria government were thwarted by the Benin President who made sure he was safe while in prison.

“When I was arrested, many people did not understand. Truly, Nigeria used all her power. Nigeria requested for me to be handed over to them by the Benin Government. The Nigerian government wanted to kill me by all means.

“There is no security; there is nothing in Nigeria. And when you want to speak against all these, they would try to kill you. What was my offence? Do I deserve to be killed?

“So President Talon said he wants to investigate me. So he said if it is about politics and human rights, it is against the law for them to hand me over to the Nigerian government.

“That is why all Yoruba people should thank President Talon on my behalf.

“There was no time I fell sick or had any health-related issues while in the prison. The Benin Republic President gave me maximum freedom to the extent that I do whatever I like. It was just that they did not allow me to have intercourse with my wife.

“The country should be regarded as one of the best African countries, owing to a series of turn around since the president took over the mantle of leadership. He has stabilised the socio-economic progress of the country.

“He invested a lot in the security apparatus of the country to the extent that, even the police are well remunerated beyond imagination, unlike the poor working condition we subject our own police to in Nigeria.

“During my stay in the prison, I enjoyed uninterrupted power supply. If everything works fine in my country, someone like me will not be out seeking for the Yoruba nation. But I will not say more than this for now.”