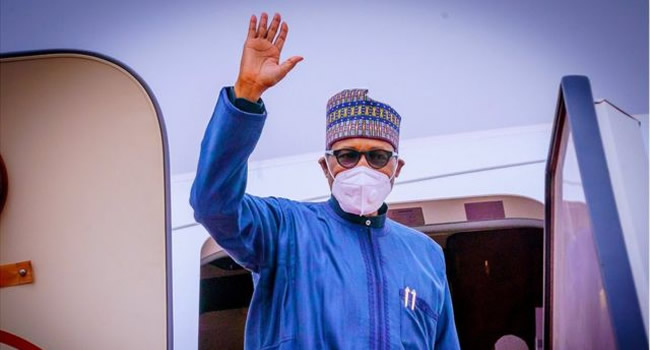 Prior to the Easter holiday President Muhammadu Buhari flew to London to keep a medical date with his British doctors. According to the presidency it was a 2-week medical check-up. Because of the Corona pandemic Buhari was forced to stay back home since last year managing his undisclosed ailment to the best of his ability. He had ‘abandoned’ Nigeria to her tumultous fate refusing to transmit power to the sidelined Vice-President. While a presidential spokesman had declared that the constitution stipulated that he stayed up to three weeks before it became necessary to hand over to his deputy.

The Special Assistant to Buhari on Media and Publicity, Mallam Garba Shehu, made it clear that the President could rule from anywhere. And therefore would be presiding over the country even in his hospital bed in London! How daft, how tactless! And we are hearing now online that Buhari’s Londonian stay could be extended given the mob trailing him about.

But those conversant with the constitution, lawyers et al, are united in their opinion that the President ought to have left the executive power prerogatives behind before jetting off to see his foreign doctors. What is important here is not whether he handed over to Prof. Osinbajo or not. What is paramount in the minds of Nigerians is the fact that Buhari prefers foreign doctors and hospitals.

Since he has built or equipped no hospital capable of taking good care of his medical needs what interrogates the sound patriotic mind is how our leaders see development in the health sector (or other sectors for that matter). The Aso Rock Clinic ‘maintained’ annually with billions of Naira budget remains a ‘mere consulting clinic’! The First Lady, Aisha Buhari, had told us how the Clinic was being mismanaged.

Prior to his arrival in London the frontline activist and human rights campaigner, Comrade Omoyele Sowore, had taken to his twitter handle to urge Nigerians resident in London to demonstrate and force the embattled President to return home and get himself treated at the ‘world-class’ hospital he built since coming to power six years ago. The irony of the message was not lost on the discerning Nigerians at home and abroad.

Shortly after his arrival in London the #HarassBuhariOutofLondon was trending online globally. And Reno Omokri, former presidential aide in the Jonathan presidency, had flown in from his base to lead scores of other compatriots to ‘occupy’ the Abuja House asking Buhari to go back home to fix the mess he created. Omokri was asking the right questions and making the right noises.

The British police reportedly came and after verifying that COVID-19 protocols were observed they left. The Nigerian government or the embassy in London must have invited them over to arrest the protesters. But by the time they encountered Omokri they were convinced that what the Nigerians were doing was not a crime.

Comrade Omokri was asking if Boris Johnson could leave England during a doctors strike and come to Nigeria to treat himself? He was asking why Buhari could ban foreign rice importation yet junketing abroad for medication? Should he not demonstrate that everything Nigerian, including doctors and hospitals, are good for local consumption? Is General Buhari not running a ‘criminal enterprise’ instead of a government?

After killing some #EndSARS protesters asking for good governance last October in Lagos is it right for Buhari to go to London to secure his life and enjoy the benefits of good British governance? After bastardizing governance back home should he not be sent back home by force to ‘eat’ the pudding he prepared?

Disturbed by the disrespectful situation the Buharideens sought a way to counter the Omokri-led ‘unpatriotic elements’ out to embarrass the President in a foreign land. They chose to rent a crowd. And the rented crowd never disappointed as they came along with placards extolling the virtues of Buhari and hammering on his right to visit any city or country of his choice for his medical needs.

The presidential aides back home (including one Jezebel called Lauretta Onochie) had argued that Buhari had been visiting London for medical tourism even before becoming President — 40 years now and still counting. That is true but the argument is disingenuous. So because he is used to a London doctor and hospital for decades building a state-of-the-art hospital in Katsina, Abuja or Daura capable of treating him and other executive parasites becomes an anathema or a crime?

Because he has been going to London to check out the other thing in his system we all should then agree to justify such irresponsible decision to take flight when the country he leads is on fire? The problem with Buharism remains that it is disorganized and visionless. It is only good at propaganda and duplicity! The President appears to be totally overwhelmed on all fronts. And his fragile health profile (coupled with his old age) rings alarm bells.

With demonstrations and counter-demonstrations, pro and anti-Buhari, in London what one saw on video clips online was a spectacle of shame to behold. How did we get to this messy point? A point where we have become a laughing stock to the rest of the world? And where lies the redeeming rod?

Between President Buhari and the London mob (pro and anti) there is this national tragedy unfolding before our very eyes: the audacity of political hypocrisy and that of hubris. Buhari is responsible for the shame our nation has been put through by those against his coming to London and those supporting the medical tourism for a fee.

The President must be ashamed of himself for not delivering any ‘change’ thus far to the health sector. While doctors and other health workers are on strike (thereby depriving millions of Nigerians of their services) Buhari is having a great time in London taking good care of himself.

This is how not to be a President of any country (not even rogue states like Somalia, Afghanistan or Libya). A leader with little or no regard for the humanity of Nigerians does not deserve our support. Nigeria deserves better! And Nigerians deserve much more!!

While we hold malice towards none we must express our commendation to those brave Nigerians in London voicing out the frustrations and concerns of millions of voiceless Nigerians. And to those who organized the counter demonstration painting Buhari in glowing colours other than those he deserves we can only say: thumbs down!

The fewer we are in the struggle for a better Nigeria the greater the share of honour! A-luta Continua!!