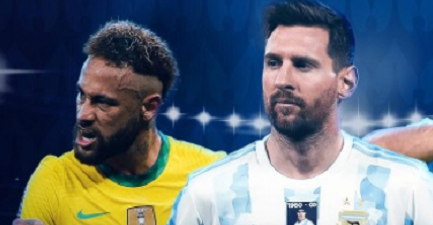 Neymar has likened playing against his friend Lionel Messi in the Copa America final with playing a video game with him.

Brazil will be facing Argentina in Saturday’s final, with Neymar and Messi both looking to win the continental title for their teams.

Both Neymar and Messi spent four years together at Barcelona before Neymar moved on to Paris Saint-Germain, and they remain good friends to this day.

Either player is yet to win the Copa America, and Neymar says their friendship will not matter much when they get on the pitch as his eyes would be on the prize.

“Messi is, as I’ve always said, the best player I’ve ever seen play and he’s a great friend, but now we’re in a final, we’re rivals,” said Neymar, as cited by the Mirror.

“I want to win and I really want to win this title, which would be my first Copa America.

“Messi has been looking for his first title with the national team for many years, and every time we [Brazil] are not present at the tournament, I cheered for him. That’s what I’ve been cheering for in the 2014 World Cup final, when he faced Germany.

“Now Brazil is in the dispute, so our friendship is on the line. The respect between us is still great but only one can win.

“When you’re friends with someone, it’s hard to forget the friendship you have – but for example when you play video games with a friend, you want to beat him anyway. It’ll be the same thing on Saturday.”

The rescheduled tournament, which is being hosted by Brazil after initial hosts Colombia and Argentina were stripped of the rights, will be coming to an end at the Estadio do Maracanã in Rio.

Djokovic edges past Shapovalov to set up Wimbledon final with Berrettini