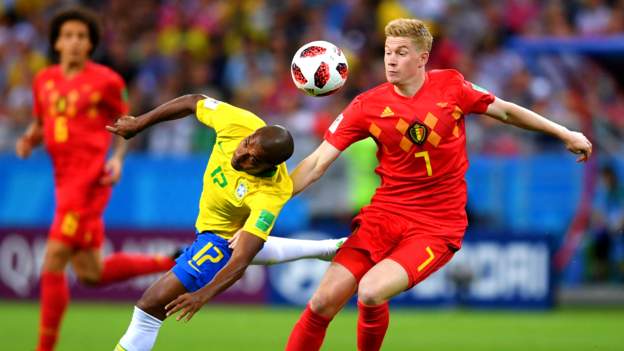 Two first-half goals by Belgium were enough to overcome Brazil in their quarter-final clash at the 2018 FIFA World Cup in Russia.

Manchest City’s Kelvin de Bruyne made it 2-0 with a sublime finish from 20 yards, after Nacer Chadli’s corner had struck Fernandinho’s arm and flew into the net for the opener on 13 minutes.

Brazil put up a better challenge in the second half as coach Tite made some changes that brought in Renato Augusto who helped them pull one goal back.

The five-time champions kept on piling up pressure against Belgium, and could have leveled in injury time but a fine save by Chelsea goalkeeper Thibaut Courtois denied them.

Neymar created some chances but his passes were not well converted by Phillipe Coutinho and Augusto in the final minutes.

Belgium sealed a 2-1 victory over the South American giants to seal a spot in the semi finals of the competition.

Brazil became the latest heavyweight to depart the competition after holders Germany and other past winners Argentina, Spain and Uruguay have also crashed out.

Belgium will take on France, who defeated Uruguay 2-0 earlier on Friday, in the semifinal next week Tuesday.

The other quarter-final matches will go down on Saturday, as England face Sweden and hosts Russia take on Croatia.