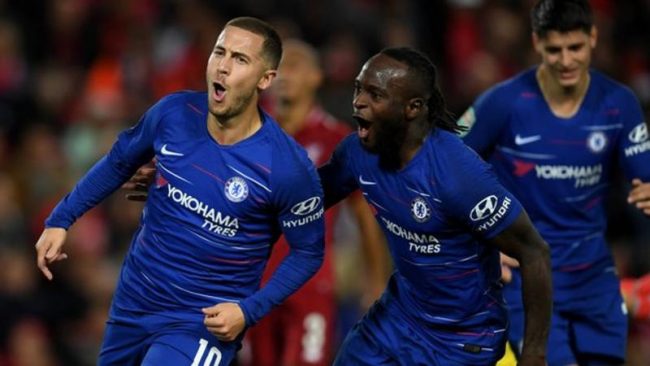 Nigerian winger, Victor Moses made the starting XI for Chelsea after a long while in their Carabao Cup third round clash against Liverpool at Anfield on Wednesday night.

Liverpool, who had won all seven games this season, took the lead through Daniel Sturridge’s finish before the Blues levelled through Emerson Palmieri’s goal awarded by VAR.

An 84th-minute strike by substitute Eden Hazard then gave Chelsea a 2-1 win over the hosts and sealed their spot in the fourth round of the competition.

“This result will give us more confidence because we drew with West Ham four days ago. The game on Saturday [with Liverpool] is more important. We have got to try and beat Liverpool on Saturday,” the Belgian forward said after the win.

Liverpool will be looking for revenge when the two sides meet again at Stamford Bridge in the Premier League this Saturday.

Super Eagles forward, Alex Iwobi was also on from the start to finish for Arsenal, who defeated Brentford 3-1 to reach the fourth round of the Carabao Cup.

A double by Danny Welbeck and a goal by Alexandre Lacazette gave the hosts the win as a superb free kick by Alan Judge could not help the visitors.

At Wembley, Tottenham Hotspur advanced to the fourth round of the EFL Cup after winning Watford 4-2 on penalties after the game ended on 2-2 at full time.