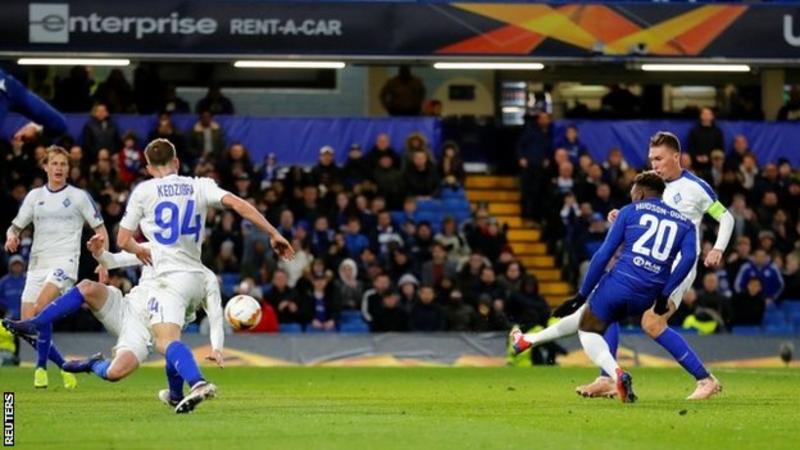 It was mixed results for English Premier League clubs in the Europa League round of 16 on Thursday night as Chelsea secured a win while Arsenal lost.

Arsenal, who played earlier in the day against Rennes in France, were beaten 3-1 after they were reduced to 10-men following a red card to Sokratis Papastathopoulos in the 41st minute.

SUper Eagles forward, Alex Iwobi had put the Gunners ahead in the 3rd minute when his cross from the left drifted past Tomas Koubek into the net.

But Benjamin Bourigeaud’s stunning strike levelled both sides immediately after Papastathopoulos’ dismissal for a second booking.

Nacho Monreal deflected Mehdi Zeffane’s cross to put the hosts on the advantage, before Ismaila Sarr drove in a header in the dying minutes to seal the win for Rennes.

The reverse fixture of the tie will be at the Emirates Stadium next Thursday.

Arsenal will now hope to repeat their heroics from the last-32 stage, where they overturned a 1-0 first-leg deficit against Belarus side Bate Borisov to progress with a 3-0 home victory.

At Stamford Bridge, Chelsea thrashed Dynamo Kiev 3-0 to stay in command of their Round of 16 tie.

Goals by Pedro, Willian and Callum Hudson-Odoi sealed the victory for the Blues, who dominated the game and won to move closer to the quarter-finals.

Dynamo Kiev – who have never won in their 15 visits to England – did not manage a shot on target.

The second leg is at Kiev’s Olympic Stadium next Thursday.