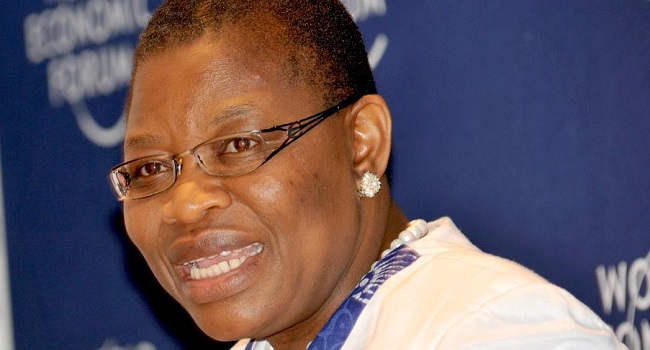 Nigeria’s former minister of Education, Oby Ezekwesili, has advised the Federal Government to suspend its plan to raise $2.78 billion in Eurobond as part of capital funding for the 2018 budget.

Eurobond is a special debt instrument issued in a currency different from the currency of the country or the market in which the bond is issued.

Ripples Nigeria reports that despite the nation’s rising external debt portfolio, President Muhammadu Buhari had recently written to the Senate seeking approval to borrow the amount.

The Eurobond offering, which is the fifth in less than two years, is expected to be sourced from the International Capital Market.

Ezekwesili, who is also a former Vice-President (Africa) of World Bank and a presidential candidate of the Allied Congress Party of Nigeria (ACPN) in the 2019 polls, gave the counsel while addressing newsmen on Monday in Lagos.

The former minister was reacting to an earlier statement made by the Minister of Finance, Zainab Ahmed, on Sunday at the just concluded annual meetings of the International Monetary Fund (IMF) and World Bank Group (WBG) in Bali, Indonesia about government’s plan to float the bond.

Ahmed had hinted that the Federal Government was considering the bond option to fund only capital projects in the 2018 budget.

“The upcoming bonds that we are trying to raise will be within the 2018 budget framework and with approved targets.

“So, we are not going beyond what was approved in the budget. The budget has approved for us to borrow both locally and internationally and we have a bond issuance with the range of $2.8 billion that we need to raise before the year runs out.

“The bond will be used to fund capital projects in the 2018 budget,’’ the minster said.

Speaking further, the finance minister noted that in spite of the nation’s debt burden, there was still enough room for the nation to borrow as its debt to GDP ratio currently stands at 3 percent.

Ezekwesili in her reaction however said the government plan to borrow more funds would further worsen Nigeria’s economic health, noting that for every N100 the country earns, N69 goes for debt servicing.

The former World Bank boss argued that incurring more debts was not sustainable as the nation doesn’t generate enough revenue.

“What, in my view, the plan to float the bond portends for the economy is that the Federal Government is digging in, instead of digging out. Already, the debt-service-to-revenue is rather high. Today, it is 69 percent. Sixty-nine per cent of revenue is used to service our debts.

“That is not a sustainable situation. I see the government quote all the time `Debt to GDP ratio’, but that is like a blunt instrument in an environment where your GDP is not reflective of your productivity.

“We measure your productivity by the revenue the GDP generates in the form of revenue of government that comes as a result of the GDP.

“Your debt to GDP is three percent and you think that gives you the legroom to borrow and borrow. No, that is not your instrument. Your instrument is your debt service tool, which is the revenue,” she said.

The former minister said it was important for the Federal Government to diversify the nation’s revenue sources and pursue deep sector and structural reforms to reposition the economy.