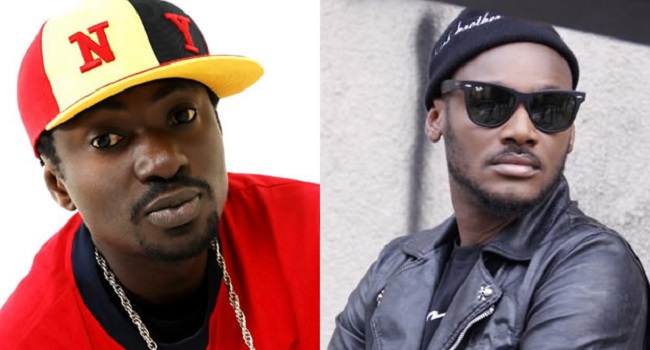 Blackface, a former member of defunct group Plantaishun Boiz has been slammed by scores of social media critics for accusing his former band member 2face of being gay in his new song.

In the new track titled ‘War’, Blackface rode on his long-standing beef with 2face calling him out over claims of hypocrisy saying he is not only a thief nut also “gay” and a “cannibal.”

The lyrics of the controversial song which is now causing a stir on social media goes thus; “I taught you how to rhyme, taught you how to flow / Now you say you’re a star, now you making dow, why you steal my song, you no let me know / Na you and your manager wey dey block my show from every carnival / Your mama say you’re innocent but I know say you be cannibal”, he sang.

Blackface also went ahead to allege that 2face engaged in gay sex to become popular; “Make I expose you for who you are, 201 know your story omo where I go start / 2Face since when dem start to yansh you for back, that’s why you no fit stand straight, that’s what made you star”.

Reacting to the diss track, fans of 2face have come in defense of the ‘African Queen’ crooner saying Blackface needs to focus on something else as they are tired of him constantly accusing his former band mate.

Muafasa @_OneNigeria wrote; “Blackface is just classless. Dissing 2Baba after how many years?? Even the beat on that “diss song” is like 20years old. We’ve moved from kpa du kpa ajegunle pattern bruv. You’ll never be.

Chibuzor ‘KingAbsolute’ Anthony @KingAbsolute wrote; My opinion on BLACKFACE:
1. BLACKFACE is not talented. Since the group went solo, he has been depending on dissing TUFACE to stay relevant, without a hit song.
2. FAZE dropped a hit jam replying TUFACE & more hits songs after that. He will be remembered more than BLACKFACE.

DADDY THE BOY @DaddyTheBoy wrote; “So Blackface wants to be forming black Eminem on his fellow face? Maybe Dissing 2 face is the only way to restore his lost glory in music industry ?

DIRECTOR D. @DirectedByDiji ~ “I don’t know what 2baba did when he was with blackface but I pray you never meet someone that won’t forgive you & move on. It’s been more than a decade & blackface still releasing a diss track in 2019? – Whatever it is, this blackface isn’t slowing down anytime soon o.”