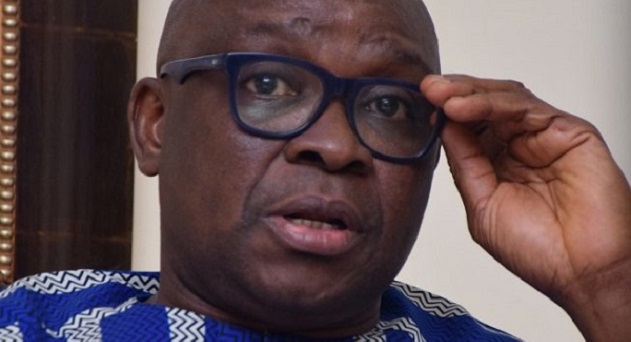 Ekiti State’s Governor Ayodele Fayose has said that it was awful that the President Muhammadu Buhari government after more than three years of blaming former President Goodluck Jonathan for its failure, has now shifted their blame to Senate President Bukola Saraki.

The governor decried how the All Progressives Congress (APC) has turned it’s obsession for the removal of Senator Bukola Saraki as Senate President to one of the party’s main national agenda, saying; “They are holding meetings upon meetings on Senator Saraki’s impeachment as if removing the Senate President will reduce the price of rice to N7,000 per bag that it was in 2015.

“It is appalling that after more than three years of blaming former President Goodluck Jonathan and the PDP for their failure, they have now shifted their blame to Senator Saraki.”

He therefore called on Nigerians, especially the youths to rise and save the country from the APC government of recklessness.

“Events in the last few weeks are pointers to the fact that for Nigeria to be rescued from this impending anarchy, the people must rise to ensure that their votes count and rule of law is sustained.”

The governor stated this when he addressed some stakeholders from Gbonyin and Ekiti East local governments on Wednesday, vowing to remain resolute in his defense of the common people of Nigeria against the “tyranny” of the President Buhari led APC federal government.

Special Assistant to the governor on Public Communications and New Media, Lere Olayinka, quoted him as also describing the arrest and detention of a journalist working with Premium Times, Samuel Ogundipe as continuation of the government’s suppression of freedom of information and of the press.

Governor Fayose said that all agencies of the federal government, especially the Independent National Electoral Commission (INEC), Economic and Financial Crimes Commission (EFCC) and all security agencies had been turned to tools of the APC.

READ ALSO: There’s local and international pressure on me to run for president— Tambuwal

He added, “Questions that must be agitating the minds of Nigerians are; how did we get to this here? How did Nigeria return to the era of arrest and detention without trial, brazing disobedient to court orders and most importantly; ballot stuffing and use of thugs to snatch ballot box?

“The party has also gained expertise in elections rigging through ballot snatching and brazing manipulation of results, thereby destroying the legacy of free, fair and credible elections bequeathed by the PDP government.

“Nigerians must therefore rise and save the country from the government of a President who behaves like a saint while so much corruption and impunity are perpetrated under his watch,” he said.