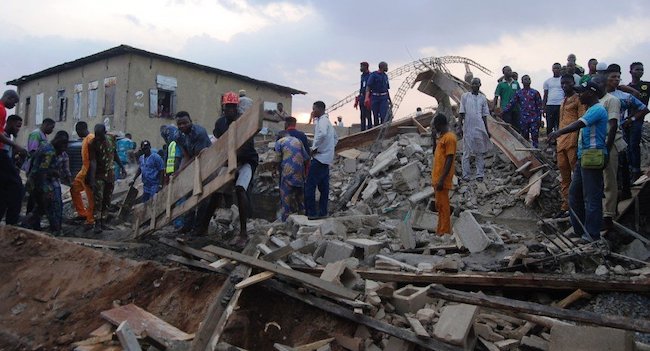 At least four persons have been confirmed dead after a two-storey building collapsed at the Flour Mills Estate, Magbon in the Badagry area of Lagos State on Wednesday afternoon.

The Spokesman of the National Emergency Management Agency (NEMA), Ibrahim Farinloye, who confirmed the incident to journalists in a statement, said five others were rescued from the rubble.

The incident came just 17 days after a 21-storey building collapsed in the Ikoyi area of the state and killed 46 people.

Farinloye said: “A two-storey building under construction at Flour mill Estate collapsed at about 1300 hour this afternoon.

“Five workers were rescued alive with various degrees of injuries and taken to Catholics Hospital at Magbon, while four died and their corpses have been deposited at the Badagry General Hospital morgue by the police.

“The bodies of the affected victims had been identified by the relations of the victims. The building is located behind a dwelling structure. Rescue operations had been concluded now.”

The Director of the Lagos State Fire and Rescue Service, Margaret Adeseye, also posted the news of the collapsed building on the Service Facebook page.

She wrote: “The victims which are mainly construction workers are however rescued with varying degrees of injury but in stable condition and had been taken to nearby hospitals for treatment.”